Why do zebras have stripes? To ward off blood-sucking insects

by Tibi Puiu
in Animals, Biology, Research
Reading Time: 2 mins read
A A
Share on FacebookShare on TwitterSubmit to Reddit 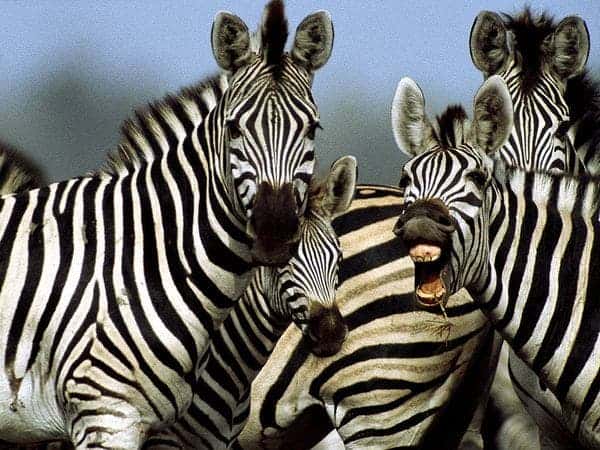 The leading theory that explains why zebras are striped (remember the age old riddle? black stripes on white or white stripes on black?) is because it offers them protection against predators, by providing camouflage, as colour blind animals confuse the strips with tall grass in the savanna. A team of researchers from Hungary, however, offer a different, scientific take regarding the development of zebra stripes. In their recently published paper in the journal Experimental Biology, the scientists proved and explain how zebra stripes make for the least attractive hide pattern for voracious horseflies.

Horseflies or tabanids, are pesky bugs that provoke highly unpleasant bites, carry deadly diseases and, well, they’re simply a drag to have a round. Now, these insects are attracted to horizontal polarized light, since reflections from water are horizontally polarized as well. This is how, in the first place, aquatic insects know where the  stretches of water where they can mate and lay eggs are located. Blood-sucking female tabanids use the the same phenomenon to launch themselves upon animal hides, guided by the linearly polarized light reflected upon them. This is why horseflies are more attracted to dark hides, which makes for a better reflecting surface than white hides. Would the same logic apply to the zebra’s stripes?

Well, the researchers put the idea to the test by performing a series of trials in a horsefly-infested horse farm near Budapest. The researchers constructed various white and black stripe patterns of variable width, density, angle, and direction of polarization of the light, then oiled them such that insects attracted to them would become trapped and quantified. As the stripes became narrower, the researchers found fewer flies were attracted to them, eventually the narrowest stripes attracted the fewest horseflies.

They then performed a trial which included horse hide patterns that where black, white or striped. To their surprise, the striped pattern was the least attractive out of the whole bunch, not intermediate as they would’ve thought.

“We conclude that zebras have evolved a coat pattern in which the stripes are narrow enough to ensure minimum attractiveness to tabanid flies,” says the team and they add, “The selection pressure for striped coat patterns as a response to blood-sucking dipteran parasites is probably high in this region [Africa].”