Why doodling should be encouraged during boring meetings 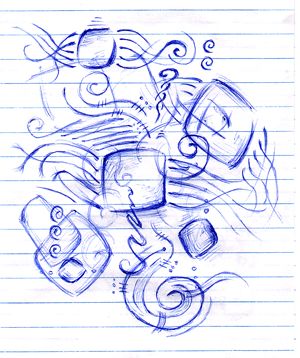 Next time they’ll catch you doodling during a boring meeting or class you will have a very good excuse for that: it doesn’t distract you but it actually stimulate you and keep you focused on whatever it is that is being said. I’m sure it mustn’t be the most pleasant sensation ever for the the speaker, but as long as it works..

And believe it or not, yes, there is a study about doodling and it shows that doodlers were able to remember more details of a monologue than the others who simply sat and listened.

Jackie Andrade, a cognitive psychologist at the University of Plymouth, UK, says that whenever one has to stay and listen to something boring his or her mind starts to wander…sometimes without returning, so not much content remains in one’s mind. However, a simple task can stop this from happening without taking one’s mind from the main task, no matter ho awfully boring it may be.

40 volunteers took part in an experiment during which they had to listen to a monotonous telephone message which lasted 2 minutes and 30 seconds. Their task was to write down the names of the people who had been invited to a party. Half of the subjects were also asked to shade in shades while doing this, as it would require the them to feel less self-conscious. The script included 8 people who could come to the party, 3 who couldn’t and 8 place names.

After this, the volunteers were given a surprise memory test in order to see how much they could remember.The subjects who had been asked to doodle scored better on both the task of writing down the names and on remembering what they had previously written. The control group remembered an average of 5.8 while the doodlers recalled 7.5, which is 29% more than the others.

So, when getting terribly bored and there is no other alternative put your money on doodling even though it’s not the action itself that is beneficial. It is the daydreaming that can get you into trouble.
source: University of Plymouth