World’s largest floating solar farm to be built in Japan

After shutting down its nuclear reactors, Japan needs to look elsewhere to generate energy. Problem is Japan is kinda crowded, so one ingenious company proposed a creative idea: install solar panels on water.

by Tibi Puiu
in News, Technology
Reading Time: 2 mins read
A A
Share on FacebookShare on TwitterSubmit to Reddit

Following the Fukushima’s meltdown, Japanese citizens voiced their concern and over-night became hypercritical of nuclear power, not entirely out of irrational reasons. Since the disaster unleashed by the tsunami that hit the island state in 2011, all of the country’s nuclear reactors were shutdown. Only recently did Kyushu Electric Power restart its first reactor after passing very stringent tests. To compensate, Japan has burned immense amounts of coal, gas and oil, which is arguably far worse than shutting down the reactors. The solution? Renewable energy. The problem with Japan, a famously overcrowded place, is that there isn’t much room left for solar panels or wind turbines. Thinking outside the box, one company proposes something different: floating solar farms.

The idea, of course, isn’t new. Kyocera has built a floating farm before. Its latest project, however, will be seven times larger and use five times more solar panels. These will be installed atop of a reservoir 50 miles from Tokyo.

Some 50,000 solar panels will cover the freshwater’s surface, which is actually brilliant. For one, the water will cool the panels helping them be at least 10% more efficient. Covering 180,000 square meters, these will also provide shade and help curb the reservoir’s evaporation so more freshwater is available to Tokyo’s citizens.

“The project will generate an estimated 16,170 megawatt hours (MWh) per year, enough electricity to power approximately 4,970 typical households,” Kyocera says on its website, noting its equivalence to “19,000 barrels of oil consumed.”

Still, 19,000 barrels isn’t a lot. The graph below shows how Japan offset the energy it lost from shutting down its nuclear reactors. 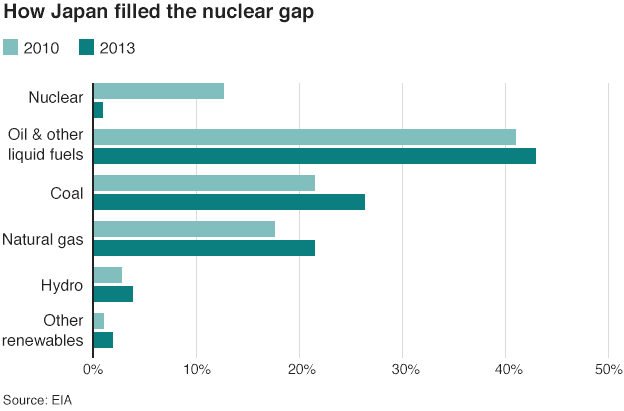 As you can see, renewables barely made a dent, and not out of lack of trying. Extremely aggressive feed-in tariffs (FIT) for renewable energy introduced in July 2012 are showing first modest signs that things are shaping up. In the meantime, the public shouldn’t be overly critical of those nuclear reactors that are modern and absolutely safe. The alternative is unwittingly colluding with a silent killer: coal. More: How nuclear power saved 1.8 million lives from 1971-2009 (ZME Science).