by Tibi Puiu
in Electronics, Technology
Reading Time: 2 mins read
A A
Share on FacebookShare on TwitterSubmit to Reddit 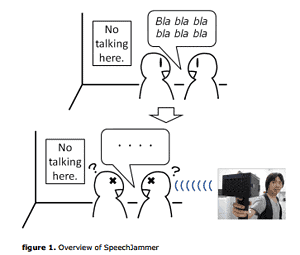 Are you fed up with meaningless, rambling conference speakers? All too tired of phone calls around you at work? Wish there was a mute button for your girlfriend? Finally, all your prayers have been answered! Presenting the ultimate silencer, the speech-jamming gun.

Japanese scientists, Kazutaka Kurihara at the National Institute of Advanced Industrial Science and Technology in Tskuba and Koji Tsukada at Ochanomizu University, recently presented their radical solution, unveiling to the world a device which feeds-back the words uttered by a targeted speaker with a delay of 0.2 seconds. The idea is simple, and has been confirmed by psychologists in the past – when a person’s voice is recorded and played back to him with a delay of a fraction of the second, it’s impossible for the person in question to speak anymore, any this is exactly what the speech-jammer does

Capitalizing on the “delayed auditory feedback” (DAF), the handheld device consisting of a microphone and a speaker, can be directed towards an uttering person and render him silent, and will keep him or otherwise go mad. The centerpiece of the device is its parametric directional speaker, which modulates the laser targeted person’s voice into an ultrasonic beam. This perturbs the air in a narrow beam, demodulating the audio to generate audible sound to anyone within that beam.

After tests, its creators state that “the system can disturb remote people’s speech without any physical discomfort.” They go on to add that the jamming-gun works best against speech that involves reading aloud than against spontaneous monologue. Applications? Maintain silence in public libraries and “facilitate discussion” in group meetings. “We have to establish and obey rules for proper turn-taking when speaking,” they say.

Check out a demo of the jamming-gun in the youtube video below.