Monkey ‘vocabulary’ could clue us in on evolution of human speech

An adorable monkey's 'ekks' and 'tsiks' might teach how speech evolved.

by Tibi Puiu
in Science
Reading Time: 3 mins read
A A

Looking to pinpoint the origin of human speech, German researchers at Tübingen University have identified the smallest units comprising the vocalization of marmoset monkeys. Like human speech, the monkey’s vocalization is made up of individual syllables of fixed length from short  ‘tsiks’ and ‘ekks’ to quiet ‘phees’.

Scientists have found that there’s an inherent rhythm with which humans are capable of producing syllables, which are a seventh of a second long on average. We’re restrained from producing any shorter syllables by our biological machinery, which includes both the structure of the voicebox and the neural pathways that govern speech in the brain.

To understand the evolution of human speech, scientists are trying to identify the fundamental processes that enable speech and language generation, but also the fundamental units of language.

Dr. Steffen Hage of the Werner Reichardt Centre for Integrative Neuro-science (CIN) at the University of Tübingen has a hunch that the biological fundamentals of speech may have looked very similar in our ancestors. He and colleagues looked for clues in our closest relatives still alive today: other primates.

The team focused on marmoset monkeys, which are small primates that live high up in the canopies of South American rainforests. There are more than 20 species, and most could fit comfortably in an adult human’s hand. They come in a wide variety of colors, from black to brown to silver to bright orange, and have soft and silky hair. Many have tufts of hair or manes on either side of their faces, which are sparsely furred or naked, making them quite adorable looking.

Typically, scientists that study the rhythm and length of syllables focus on other animals such as passerine birds, but Hage and colleagues decided that marmosets are more interesting, being far more closely related to us.

The researchers recorded thousands upon thousands of monkey vocalizations in a sound chamber. They intentionally interrupted the monkeys’ “tsiks” and “ekks” with white noise at regular intervals to make them fall quiet. Researchers might have been rude, shamelessly talking over the moneys, but at least they found out something that could turn out to be very important.

“The marmosets’ ‘phee’ had so far been considered part of their basic vocabulary, alongside the ‘tsik’ and ‘ekk’. We observed that they would stop right in the middle of their ‘phee’ calls when we disrupted them with noise. Moreover, that would only happen at specific points within the call,” said Thomas Pomberger, one of the study’s co-authors. 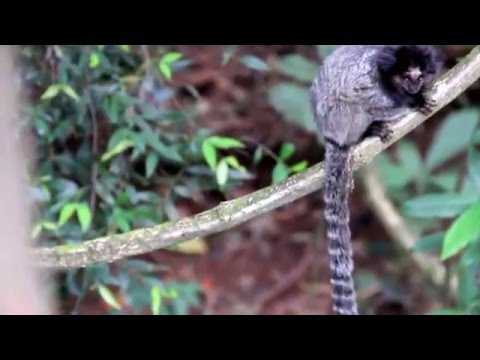 What the researchers learn was that the long ‘phee’ call actually consists of small units of about the same length as a ‘tsik’ or ‘ekk’, lasting about 100 milliseconds.

“Until now, the supposed existence of the long ‘phee’ has not allowed for the conclusion that we can draw now: just like us, marmoset monkeys have a ‘hardwired’ rhythm that controls their vocalisation. It is even similarly fast,” said Hage in a statement.

This sort of rhythm could have evolved in an early ancestor as a prerequisite of speech. Of course, the evolution of speech is still an open question, but little by little, we’re getting there — one tsik and ekk at a time.