How a musician and his robots improvise together

by Mihai Andrei
in News, Technology, Videos
A A

In the video above, you can see PhD student Mason Bretan from the Robot Musicianship Group at Georgia Tech in the US jam with some of the robots he helped create. The robots got rhythm, and they got the skills. Just look at that amazing marimba solo at the middle of the video – that was completely improvised. 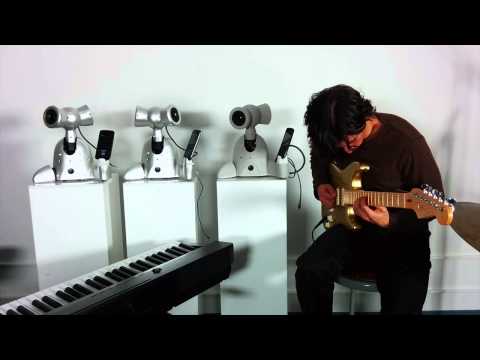 “The piece is called “What You Say” and is inspired by the high energy funk piece, “What I Say”, from Miles Davis’ Live-Evil album. The incredible brilliance of the musicians on that album (as well as the numerous other great musicians around the world) are not only an inspiration to me and my own musical and instrumental aspirations, but also set the standard for the level of musicianship that I hope machines will one day achieve. And through the power of artificial intelligence, signal processing, and engineering I firmly believe it is possible for machines to be artistic, creative, and inspirational”, Bretan wrote in his Youtube description.

The lab has been working on the robots for the past six years, with the ultimate goal of enabling them to compose jazz music and grooving to it. The star of the band is Shimon, the robot who holds the mallets. Since Bretan has joined the team, they’ve also developed the three smartphone-connected, bopping members – Shimis. Shimis added a more electronic feel and some dance moves to the existing music.

“I’m always trying something new with the robots, and sometimes they surprise me with something that’s sort of out there or pretty cool,” Bretan said in an interview.

In order to do this, scientists have actually had to break down the music theory and translate it into a sort of programming language. Then, in order to progress, they had to make the robots understand what they can do and what their limitations are.

“Because their note generating algorithms rely on their physical constraints, if you give the same algorithm to a different robot (like a marimba playing robot with one arm or 10 arms), you will get different musical behaviours and outcomes,” Bretantold Mashable via email.

It’s important to note that the goal isn’t to replace human musicians – but rather to explore the creativity that robots might harbor. It seems a bit strange to say that robots harbot creativity, but that’s basically how you call exploring different musical patterns, isn’t it? Even if it’s based on preprogrammed algorithms, I think you can still call it creativity.

A musician since the age of 4, Bretan blended his passion for music with his interest in programming and robotics to develop robot musicians.

“I do this not only because of the interesting science behind it, but also because I think that autonomous machines have artistic potential and the ability to be creative”, Bretan added.

His project and dissertation will likely be finished in 2015.