What's the most important resource on the planet? Water of course.

What’s the most important resource on the planet? Water, of course. Considering climate change and waste, it’s foreseeable that the water many of us take for granted will become an expensive and precious commodity.

This is already the for case three quarter of a billion people living without access to clean water. A Japanese startup wants to cut on waste by recycling the water we use to shower. They’ve made a shower system that uses the same five gallons of water over and over again. A family of three can use these five gallons to take five minute showers each day for two weeks.

Jonah Schein, technical coordinator for homes and buildings for the EPA’s WaterSense program, says that an American typically showers for eight minutes, and every minute uses at least 2.5 gallons of water. Around 20 percent of that time is not actually spent on showering because we’re busy soaping. And research conducted by Lawrence Berkeley National Laboratory has suggested that the waste levels may be even higher — 30 percent of shower water overall and 41 percent of “hot water energy.”

The first and most convenient thing you can do to cut down on waste is turn off the tap when you’re not actually showering. Even so, showering is hugely energy intensive and water consuming. It’s also deeply personal, and a lot of people will draw the line here. For instance, in 1992 the U.S.  mandated that showed heads be sold from there on with a flow rate no larger than 2.5 gallons per minute. People were not pleased. Seinfeld even made an episode about this in 1996 when he and the gang turned to the black market to find a shower head whose flow could satisfy them.

Instead of having people shower with an eyedropper, Toyko startup Hotaru devised a way to recycle shower water. This way, people can shower and not have to feel guilty or make sacrifices.

Details are still sketchy, but according to Tech Crunch‘s Jay Donovan who met the Hotaru team at SXSW 2016, the setup can recover 95-98 percent of the water used in the shower. The team estimates a user can shower with 5 gallons as if they were 160 gallons. That’s 150 gallons of water saved. Sensors constantly check for water quality and contaminants, and the water should be clean even after many rinses.

Hotaru consists of a plastic base which holds five gallons of water, a pop-up nylon tent and a telescopic pole that keeps the handheld shower head in place. Water is collected from the drain in the floor, then pumped through water purifying filters. Filters have to be changed every two months.

Hotaru is off-grid and can be powered by a generator or AC hookup. It’s primarily geared towards campers and modern day nomads, but I see no reason why it couldn’t be adapted for home use — other than cost, that is. Tech Crunch says Hotaru might be commercially available in 2017 for $3,000. 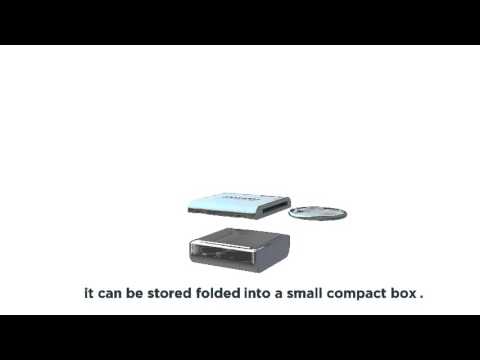 What do you think, would you buy one?