by Tibi Puiu
in Science, Technology
Reading Time: 2 mins read
A A
Share on FacebookShare on TwitterSubmit to Reddit 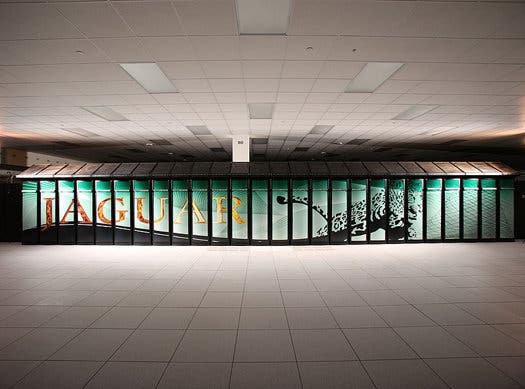 No, not the sports car, neither the predatory feline, but Oak Ridge National Labs Jaguar – a supercomputer of immense computing capabilities set to top the ranks of the fastest computers in the world, for the second time, after a GPU (graphical processing unit) upgrade.  Capable of simulating physical systems with heretofore unfeasible speed and accuracy -from the explosions of stars to the building blocks of matter – the new upgraded Jaguar will be capable of reaching an incredible peak speed of 20 petaflops (20,000 trillion computations per second). The speedy computer will be renamed “Titan” after its overhaul.

This is the second time the ORNL supercomputer will peak the top500 supercomputers of the world list, after it was surpassed by Japan’s K Computer and China’s Tianhe-1A supercomputer last year. The title will be earned as a result of an inked deal between Cray Inc., the manufacturer of the XT5-HE supercomputer at the heart of Jaguar, and ORNL, which will overhaul the DARPA computer with thousand of graphics processors from NVIDIA as well as chips from Advanced Micro Devices.

“All areas of science can benefit from this substantial increase in computing power, opening the doors for new discoveries that so far have been out of reach,” said associate lab director for computing Jeff Nichols.

“Titan will be used for a variety of important research projects, including the development of more commercially viable biofuels, cleaner burning engines, safer nuclear energy and more efficient solar power.”

The multi-year contract, valued at more than $97 million, will make out of Titan at least twice as fast and three times as energy efficient as today’s fastest supercomputer, which is located in Japan.