TV has a negative long term impact on toddlers 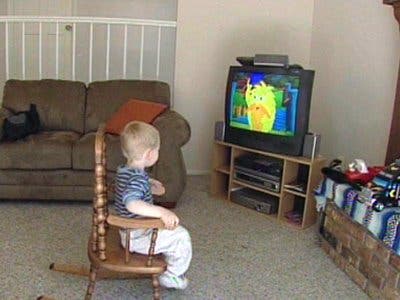 If you want your kids to be healthier, thinier and smarter, then you probably should keep them away from TVs while they’re toddlers. A recent (and quite shocking) joint study conducted by Université de Montréal, the Sainte-Justine University Hospital Research Center and the University of Michigan revealed that television exposure at ages of 2 and under have significant negative impacts, including unhealthy habits and poor school adjustment.

“We found every additional hour of TV exposure among toddlers corresponded to a future decrease in classroom engagement and success at math, increased victimization by classmates, have a more sedentary lifestyle, higher consumption of junk food and, ultimately, higher body mass index,” says lead author Dr. Linda S. Pagani, a psychosocial professor at the Université de Montréal and researcher at the Sainte-Justine University Hospital Research Center.

The study analyzed over 1300 children, with the goal of determining the impact TV has on future academic succes and social involvement, and the results were quite dire.

“Between the ages of two and four, even incremental exposure to television delayed development,” says Dr. Pagani.

“Early childhood is a critical period for brain development and formation of behaviour,” warns Dr. Pagani. “High levels of TV consumption during this period can lead to future unhealthy habits. Despite clear recommendations from the American Academy of Pediatrics suggesting less than two hours of TV per day — beyond the age of two — parents show poor factual knowledge and awareness of such existing guidelines.”

Here’s just a quick look at the numbers caused by watching too much tv at that age:

“Although we expected the impact of early TV viewing to disappear after seven and a half years of childhood, the fact that negative outcomes remained is quite daunting,” says Dr. Pagani. “Our findings make a compelling public health argument against excessive TV viewing in early childhood and for parents to heed guidelines on TV exposure from the American Academy of Pediatrics.”