Rubik’s Cube In Center Of Earth?

by Mihai Andrei
in Geology, Studies
Reading Time: 3 mins read
A A
Share on FacebookShare on TwitterSubmit to Reddit 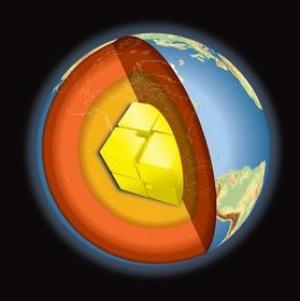 When Swedish researchers published this theory of theirs, nobody took it seriously. Without paying much attention to the scientific community, they pursued and tried to prove what they were claiming. It seems now they have managed to present evidence which supports their way of viewing Earth’s internal core. The findings may be of significance for our understanding of the cooling down of the earth, and of the stability of the earth’s magnetic field.It’s been known for a whole lot of time that the inner core of the earth, a sphere consisting of a solid mass with a radius of about 1,200 km, is mainly made up of iron. But some seismic observations have revealed a some very strange things; for example, elastic waves pass more rapidly through this core in directions that are parallel to the earth’s axis of rotation than in directions parallel to the equator-a phenomenon that has not been previously explained. At the high temperatures which are at the center of our planet, they should be passing at the same speed regardless of their direction. So this brings us back to the scientists from the Uppsala University and KTH who have presented an explanation for this puzzling fact.

They published a series of articles in Science which had been previously published in Nature and Science. This comes after their innitial publishing in 2003 in which they wrote strong theoretical proof that the earth’s core assumes the “body” (as they called it), which is a structure that despite its high degree of symmetry evinces a surprisingly high level of elastic anisotropy. This body is a centered cubic crystal structure at high temperatures. This idea contradicts many other theories, but it has both experimental and theoretical support. To support it, they presented simulations of how seismic waves are reproduced in iron under similar conditions to the ones deep down. The result was a difference of about 12 percent depending on their direction, which could be a good enough explanation.

“We found that the body-centered cubic structure of iron is the only structure that could correspond to the experimental observations,” says Börje Johansson, professor of condensed-matter theory at Uppsala University.

The thermic balance is dependent on the amount of heat that is stored in Earth’s core. This heat is dependent on the crystal structure of the iron in the inner core. This structure forms a cube with atoms in each corner and a further atom in the middle of this cube. It’s orientation is such that allows its great diagonal to be directed along the earth’s axis of rotation, which makes it possible for the iron to evince sound propagations with the velocities observed.
“This study opens new perspectives for our understanding of the earth’s past, present, and future,” says Natalia Skorodumova, a researcher at the Department of Physics and Materials Science.
Truly a great study, but this theory is still in the works. A different, yet fascinating view.