Plankton To The Rescue 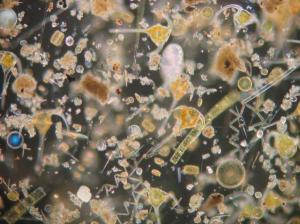 Nature has a way of defending itself and even things which we fail to understand play their part. For example, the reef helps protect the shore from devastating waves and tsunamis – and the recent tragic events were in a way just a reflection of what we are doing to the planet. Massive man made constructions were no way near as effective as the reefs were.

Plankton plays a huge role in regulating our planet. They are considered to be be some of the most important organisms on Earth, due to the food supply they provide to most aquatic life. But there is something we failed to understand about them. Microscopically tiny marine organisms known as plankton increase their carbon uptake in response to increased concentrations of dissolved CO2 and thereby contribute to a dampening of the greenhouse effect on a global scale. An international group of scientists led by the Leibniz Institute of Marine Sciences in Kiel, Germany documented this biological mechanism in a natural plankton community for the first time.

Scientists  modeled the future ocean and found three major areas of concern: increased CO2 uptake by plankton will accelerate the rate of ocean acidification in deeper layers, leading to a decrease in oxygen concentrations in the deeper ocean, and will negatively influence the nutritional quality of plankton. The latter development can have consequences for entire food webs in the ocean. The world oceans are by far the largest sink of anthropogenic CO2 on our planet. Until now, they have swallowed almost half of the CO2 emitted through the burning of fossil fuels.

But we are not able to understand something about that; scientists are not sure how the oceans are able to continue to alleviate the steady rise in atmospheric CO2 in the future.

Ulf Riebesell describes the reaction of his team:

“We expected the organisms to show distinct reactions to changing CO2 conditions. What really surprised us, however, was the dimension of this effect. Basically, we can now say that the biology in the oceans is significantly affecting the global climate system.”.

He then underlined the important part of his study.

“Our results probably represent only the tip of the iceberg. I am certain that scientists will discover further biological feedback mechanisms in the near future. It is essential not only to identify and to understand these mechanisms, but also to quantify their effect on the global climate system, now and in the future. “.