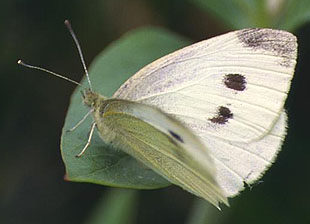 Butterflies have fascinated people for as long as we can remember; the beauty of their wings is known to just about everybody and well just about everybody loves them. But behind their naive beauty lies a mistery which has baffled scientists as they couldn’t understand how these colours are created. Marco Giraldo has been examining the structure of the surface of the wings of the cabbage white and other butterflies. Among the things he has discovered is why European cabbage whites are rebuffed more often than Japanese ones. Giraldo will be awarded a PhD by the University of Groningen on 25 January 2008.

In fact, the colours are used as an advertisement; the pattern and pigmentation allows them to spot their species from distance and differentiate the males from the females. The surface of the wing is constructed from coloured dots, called scales, each about 50 x 250 micrometers in size which means that there is a whole lot of them. However, scientists don’t know much about how the colour itself is created; in fact, the only thing they know is that it is created in two different ways: via pigments and via nanostructures on the scales.

A scale is made of two layers, linked by pillars. The undersurface is virtually smooth and without structure, but the upper surface is formed by a large number of elongated, parallel ridges, about one to two micrometers from each other. The colour is then determined by how the light is dispersed and by the light which is absorbed by the nanostructures.

Aside from scientific interest, this study could have an impact on the colour industry. Just think about the optic effects which could be created and the splenind colours which could be obtained. So the industry should keep an eye out for butterflies.