by Mihai Andrei
in Oceanography, Studies
Reading Time: 2 mins read
A A
Share on FacebookShare on TwitterSubmit to Reddit 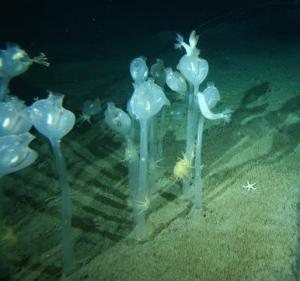 The return of three Antarctic marine science research vessels marks the crowning of one of Australia’s most ambitious International Polar Year projects, a census of life in the Antarctic seas. The ships (Aurora Australis and collaborating vessels L’Astrolabe from France and Umitaka Maru from Japan) came back from the Southern Ocean, their decks overflowing with a vast array of ocean life.

These samples of ocean life are just fascianting, with most of them never even seen before; these unknown species delighted scientists. Aurora Australis voyage leader Dr Martin Riddle says that their expedition uncovered a remarkably rich, colourful and complex range of marine life in this extreme environment which has been previously undiscovered.

“Some of the video footage we have collected is really stunning – it’s amazing to be able to navigate undersea mountains and valleys and actually see what the animals look like in their undisturbed state,” he said.

“In some places every inch of the sea floor is covered in life. In other places we can see deep scars and gouges where icebergs scour the sea floor as they pass by. Gigantism is very common in Antarctic waters – we have collected huge worms, giant crustaceans and sea spiders the size of dinner plates.

We haven’t discovered the extreme environments from our planet yet, and these explorations are more than welcome. Still, could the much talked about nuclear waste dumped in Antarctica have something to do with these species? Nobody seems to even mention this, so it’s probably not the case.

“Specimens collected will be sent to universities and museums around the world for identification, tissue sampling and bar-coding of their DNA. Not all of the creatures that we found could be identified and it is very likely that some new species will be recorded as a result of these voyages.”