According to a research conducted by researchers from the Cornell University the portions and the plates depicted in more than 50 paintings of the Last Supper have gotten bigger as time passed – way bigger. This finding seems to obviously suggest that as time passes, we eat more and more, which should raise some concerns; overeating is one of the main causes of the growth of obesity cases (d’oh).

“We took the 52 most famous paintings of the Last Supper (from the book ‘Last Supper,’ 2000) and analyzed the size of the entrees, bread and plates, relative to the average size of the average head in the painting,” said Brian Wansink, the John S. Dyson Professor of Marketing and of Applied Economics and director of the Cornell Food and Brand Lab. 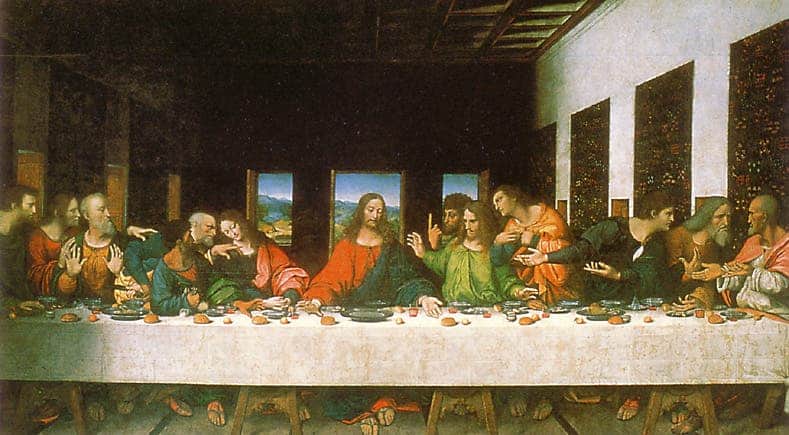 The analysis was aided by computers design software that enabled the researchers to scan, rotate, and calculate size of objects regardless of their orientation.

“The last thousand years have witnessed dramatic increases in the production, availability, safety, abundance and affordability of food,” said Cornell’s Wansink, author of “Mindless Eating: Why We Eat More Than We Think.” “We think that as art imitates life, these changes have been reflected in paintings of history’s most famous dinner.”

It’s been known for quite a while now, that especially in Western Europe and North America, people eat way more than they need. The thing is your body if you eat more than you need all the time, your body will be tricked into thinking it needs more than it actually does. You can also eat more because it takes about 15-20 minutes for your brain to process the fact that you don’t need any more food; so you could be even feeling hungry, and actually not need anymore. Anyway, I remember an old saying I heard from some elder people, that went something in the lines of: “The best meal is that which leaves you slightly wanting more”. Maybe there’s some truth to that after all.