Humanity is still subjected to the natural process of evolution, despite advances

by Tibi Puiu
in Anthropology, Studies

Evolution, in very loose lines, is defined as the process which allows a species to survive by passing on the differentiating traits most likely to help offspring adapt to the world through means of natural and sexual selection. Considering the world around us has been shaped so much by human hand, a lot of people have questioned whether the natural process of evolution still applies to modern day humans. A research carried out by scientists in Finland concludes that the human evolutionary process is still well in place, and that we don’t necessarily need to study early hunter-gatherer communities from 10,000 years ago to understand how the human species evolved, and subsequently survived. 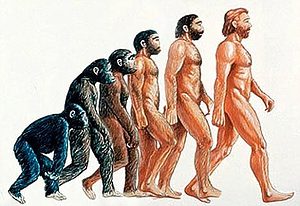 The environment we live in today has been almost completely artifically revamped. Advances beginning with the agricultural and industrial revolutions, have lead to significant advances which have shaped our way of life and made us less subsceptible to external natural stimuli, like diseases, hunger, and so on – at least in the parts of the world we like to call “civilized”. To see if all these factors have affected the billion-year old process of evolution, scientist  in an international collaboration, analyzed church records of about 6,000 Finnish people born between 1760-1849 to determine whether the demographic, cultural, and technological changes of the agricultural revolution affected natural and sexual selection in our species. Finland was an ideal choice for study material, since the country’s church has kept strict records of births, deaths, marriages, and wealth status, which were kept for tax purposes for centuries.

This relatively extensive data set allowed the researchers to form patterns and compare them with other species. The scientists looked at four key aspects that the agrarian industry of the time affected people, namely survival to adulthood, access to mates, mating success and fertility per mate. The scientists found that the modern farmers and fishermen of Finland responded to evolution much in the same way other species did as well.

Project leader Virpi Lummaa, of the department of animal and plant sciences, says: “We have shown advances have not challenged the fact that our species is still evolving, just like all the other species ‘in the wild’.

“It is a common misunderstanding that evolution took place a long time ago, and that to understand ourselves we must look back to the hunter-gatherer days of humans.”

Lummaa adds: “We have shown significant selection has been taking place in very recent populations, and likely still occurs, so humans continue to be affected by both natural and sexual selection. Although the specific pressures, the factors making some individuals able to survive better, or have better success at finding partners and produce more kids, have changed across time and differ in different populations.”

As for most animal species, the authors found that men and women are not equal concerning Darwinian selection.

“Surprisingly, however, selection affected wealthy and poor people in the society to the same extent.”

Understanding how natural and sexual selection still affects modern humans, in a time in which culture and science seeks to surpass our biological needs is extremely important to understanding ourselves in the first place, and hopefully predicting what shape society and the human species as a whole might take in the future. The present research offers some clues and glimpses that suggest the impact of natural and sexual selection which affects all living organism on Earth still very much applies to humans as well, and should not be underestimated.

“Most scientists studying human evolution focus only on our hunter-gatherer way of life 10,000 years ago, but we show that, albeit interesting, this will not give you a complete picture of the story — we also need to focus on how people were living until very recently, and probably even today,” Courtiol added.

“Extending our research toward modern days would be particularly interesting to understand how the current environment continues to shape humans,” Courtiol said. “This could be potentially of importance from a medical point of view, to understand, for instance, how quickly our immunity can respond to new major epidemics. One major obstacle is that we need reliable data at the level of individuals — number of offspring, number of partners, birth and death date — across the lifetime of all born individuals, and such datasets are rare because even many famous longitudinal studies are biased towards certain types of people or do not cover all necessary life events.”

Their findings are published in Proceedings of the National Academy of Sciences (PNAS).