Attention deficit people may have too much brain, scientists say 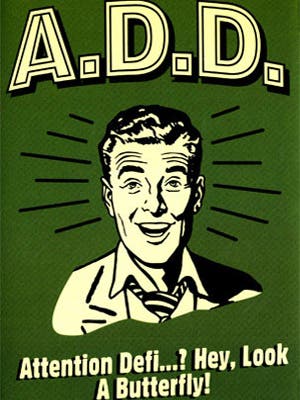 In what can be considered somewhat paradoxal, according to a recent study from the University College London, scientists have found larger than average volumes of grey matter in certain brain regions of people easily distracted. Meaning, people who are easily distracted may have “too much brain”.

This conclusion came after scientists compared the brain activity in both people who get distract and those who can focus on a task. Each individual was quizzed about various attention orientated activities they may perform – things like how often do they notice traffic signs or if they ever get sidetracked to the extenct they forget why they’re in a particular location or the goal of a particular activity. The most distracted individuals received the highest score.

What researchers observed is that there was a significant different in gray matter levels between individuals scoring high (easily distracted) and those scoring low in a region of the brain known as the left superior parietal lobe (SPL). Namely, the easily distracted had more gray matter in that region.

To prove whether indeed the SPL gray matter levels have a major role to play in attention deficit, researchers turned to transcranial magnetic stimulation or brain damping. Fifteen volunteers had the activity of the SPL part of their brains dampened with a magnet for around half an hour, after they were asked to perform a timed task both with and without a distraction. The difference in the time taken to perform the tasks is a measure of how easily distracted a person is, says Ryota Kanai, the head-researcher.

Following the SPL dampening, for each individual with high scores on the previous test the time taken to complete the task had increased by around a quarter, on average.

“This suggests that the left SPL is involved in top-down control of attention,” says Kanai.

As conclusion, the two experiments suggest that the left SPL works to overcome distraction, and that those with larger left SPLs are more easily distracted.

“There are some signs that we can modulate attention” using transcranial direct current stimulation near to the left SPL, Kanai says. If confirmed, the technique might be useful for people whose distractibility becomes problematic, such as those with attention deficit hyperactivity disorder (ADHD).