Drought may be a big problem in decades to come

by Mihai Andrei
in Climate, Environmental Issues, Studies
Reading Time: 2 mins read
A A
Share on FacebookShare on TwitterSubmit to Reddit 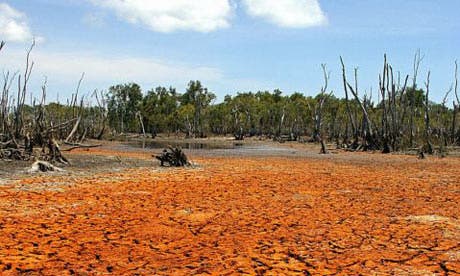 The problem of a water shortage has been on the table for quite a while now, and as time passes, it is becoming more and more of a probability. Especially the United States and other heavily populated and industrailized countries are threatened by this issue. A detailed analysis conducted by National Center for Atmospheric Research (NCAR) scientist Aiguo Dai concluded that growing temperatures associated with global warming will cause a drying of the climate as future decades will pass.

Using a system comprising 22 computers that ran climate models and an impressive list of drought conditions, as well as taking into consideration the previous studies, the climate research showed that by mid 2030, dryness will probably increase substantially throughout most of the western hemisphere, and also areas such as Eurasia, Australia and even Africa – most of the world, actually.

However, areas with higher latitudes (Alaska and Norway, for example) are likely to become more moist as time passes; the climate study was based on the current rate of greenhouse emission, and it is a part of a longer research project.

“This research does an excellent job of placing future warming-induced drought in the context of the historical drought record,” says Eric DeWeaver, program director in NSF’s Division of Atmospheric and Geospace Sciences, which funds NCAR. The work argues credibly that the worst consequences of global warming may come in the form of reductions in water resources.”

Regional climate studies are harder to conduct than the ones on a global scale, but these predictions seem adamant to take place; what’s even worse, most of the United States will be significantly drier in about 20 years from now.

“We are facing the possibility of widespread drought in the coming decades, but this has yet to be fully recognized by both the public and the climate change research community,” Dai says. “If the projections in this study come even close to being realized, the consequences for society worldwide will be enormous.”