by Tibi Puiu
in Animals, Studies, Technology
A A

It’s a lazy dog owner’s dream come true. What if you had a remote control that you could use to instruct your dog to perform various household tasks, like say… grab you a cold one from the fridge? Scientists at Auburn University, Alabama have devised a system that makes such a thing possible, although the long term goal of such an application  is more noble than petty wishes during a hot, lazy afternoon. 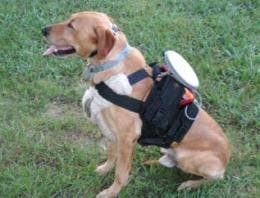 Jeff Miller and David Bevly of the Department of Mechanical Engineering at Auburn designed a control suite system comprised of  a microprocessor, wireless radio, GPS receiver, and an altitude and heading reference system. An embedded command module with vibration and tone generation capabilities allows a human to remotely instruct a dog strapped with such a system to autonomously guide it, even if the human is miles away from the pet. Tests in a structure and non-structured environment show obedience accuracy up to almost 98%.

It’s not just about satisfying lazy dog owners. Dogs are still the most reliable and cheapest method at the same time for performing a series of sensing tasks that technology today is only starting to replicate. Dogs can sniff out explosives and drugs with dazzling accuracy, and best of all they’re mobile. Actually, dogs’ noses are so sensitive they can be trained even to sniff cancer! Until really smart and agile robots can be deployed, dogs are also the best option emergency squads have at their disposal during rescue operations.

Dogs are most effective when they’re instructed and guided through the entirety of an operation, but sometimes dog handlers can’t reach certain locations, like narrow debris following the collapse of buildings after an earthquake. Moreover, in a noisy environment or where the dog’s hearing is compromised giving the necessary commands might also be impossible.

Using the system, the researchers demonstrate that dogs obey commands almost flawlessly simply by responding to tones and vibrations. “The ability to autonomously control a canine has far reaching,” the team says. Indeed, a number of applications can be thought of. For instance, the build-in GPS could be used to program a haptic feedback system for the visually impaired, helping them better navigate their surroundings.