Dogs understand humans’ point of view – are much more likely to steal food at night, when they can’t be seen

A study conducted by Dr. Juliane Kaminski of the University of Portsmouth’s Department of Psychology concluded that when humans forbid dogs to eat foods, dogs are 4 times more likely to steal the food in the dark, when they think humans can’t spot them. 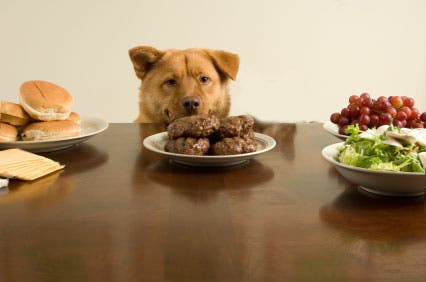 It’s interesting to see how dogs actually adapt to what they believe humans can see, basically understanding our point of view.

Dogs based their stealing strategies based not on the fact that they can see or not in the darkness, but based on their belief that humans can see or not in low light conditions. According to Dr. Kaminski, humans attribute a few qualities and emotions to other living things – this study being quite a slap on the wrist in that matter.

The study had 42 female and 42 male domestic dogs who were 1-year-old or more. She made sure the selected dogs were comfortable sitting in a dark room without their owners. The report states that the tests were complex and involved many variables to rule out that dogs were basing their decisions on other simple associations – like for example a pavlovian reflex implying that dark means food. The research concluded:

“The results of these tests suggest that dogs are deciding it’s safer to steal the food when the room is dark because they understand something of the human’s perspective.”

The research was published in Animal Cognition