by Mihai Andrei
in Anthropology, Studies
Reading Time: 2 mins read
A A
Share on FacebookShare on TwitterSubmit to Reddit

Researchers from New Zealand working in remote Cambodian mountains are shedding new light on the lost history of an enigmatic unidentified tribe by studying their eerie burial rituals.

The University of Otago scientists have been working since 2003 to geo-locate and survey 10 interment sites and to used radiocarbon dating on samples of coffin wood, tooth enamel and bone. 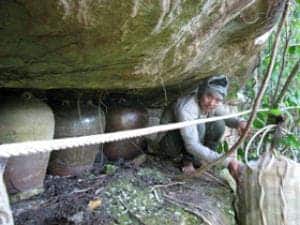 With colleagues from Cambodia, Australia, USA and Scotland, Drs Nancy Beavan and Sian Halcrow of the Department of Anatomy have just published the dating of four sites in the journal Radiocarbon. The dating revealed that the mysterious rituals, unique in the world, were performed from at least 1395AD to 1650AD. Why is this important? Well, according to Dr Beavan, who is currently in Cambodia, this period coincides with the decline and fall of the powerful Kingdom of Angkor, which was seated in the lowlands.

“Through our work we hope to broaden the understanding of this history beyond the legacies of the great Khmer Kingdom alone to those who lived within its margins,” she says.

Dr Sian Halcrow says that archaeological findings from another of the 10 sites, which she and Dr Beavan are currently preparing for publication, and they claim they will publish additional details and clues in the paper. It’s not hard to understand why we know so little of these rituals, given the extreme difficulty of the fieldwork caused by the location itself.

“In 2010 one of our campsites was invaded by a wild elephant in the dead of night and it had to be driven off by our camp crew banging on cooking pots. It turns out we had pitched camp between two tempting stands of wild banana. We packed up and headed off soon after that.”