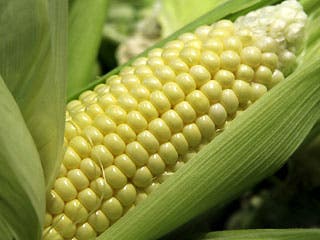 I’m really not sure what to think about genetically modified food; in theory, it seems like one of the best ideas ever, but if we don’t fully understand the ramifications of the modifications, it can have really harmful effects. But still, the study I’m going to tell you about is not that. It’s about the effects bug killing korn has (that’s a great name for a rock album, by the way).

The corn was genetically modified to produce an insecticidal protein called Bt that had remarkable results: it reduced damage done by corn-borer (corn’s biggest enemy) by 20-70%. Overall, since the introduction of this protein 14 years ago, farmers only from Illinois, Iowa, Minnesota, Nebraska and Wisconsin reported a benefit of almost 7 billion dollars.

But what’s really interesting is that most of this benefit was reported from traditional non-modified corn, which was able to grow in less stressful conditions, without the stress of insects.

“That’s sort of the wow factor,” Bill Hutchison, the head of entomology at the University of Minnesota and lead author of the study, said in a telephone interview. “We didn’t realize until we started really adding it up over 14 years that that two-thirds of the benefit is on the non-Bt corn acres.”

Every farmer who uses Bt protein corn is required by law to plant at least 20 percent regular corn to prevent bugs from developing a natural immunity to the pesticide; so since Bt corn farmers plant conventional corn to, they also feel the residual effect the protein has. But even if the corn borers are facing their darkest days, they can still be a danger in years to come.

“Farmers are asking, ‘If populations are low, do I still need to pay for this Bt technology?’” Hutchinson said. “Our models also show that if they just stopped planting Bt corn, in about 4 to 5 years the corn borers probably would come back.”