by Tibi Puiu
in Psychology, Studies
Reading Time: 4 mins read
A A
Share on FacebookShare on TwitterSubmit to Reddit 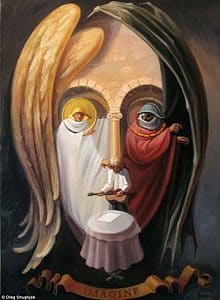 When you first see this magnificent painting by Ukranian painter Oleg Shuplyak, your brain perceives the portrait of the famous Beatles frontman John Lenon. However, on a closer look, one will immediately notice that the portrait is actually made out of a sum of parts – a table and a troubadour make for the mouth, two men dressed in long clothes make for the eyes and cheeks, a building’s double archway makes for the eyebrows and so on. There are two mental functions which help us distinguish shapes and geometry into objects – global when the sum is put ahead of the parts, and local when the parts are put ahead of the sum.

In a study which tackles a highly controversial subject, psychologists at University of  Nebraska-Lincoln have found that people, men and women included, perceived images of men as whole (global cognition), while images of women were processed as an assemblage of its various parts (local cognition). The researchers believe this is a deeply rooted human cognition feature, which serves to  provide clues as to why women are often the targets of sexual objectification. I told you this was controversial.

“Local processing underlies the way we think about objects: houses, cars and so on. But global processing should prevent us from that when it comes to people,” said Sarah Gervais, assistant professor of psychology at the University of Nebraska-Lincoln and the study’s lead autho. “We don’t break people down to their parts – except when it comes to women, which is really striking. Women were perceived in the same ways that objects are viewed.”

The participants were presented in a random manner with  dozens of images of fully clothed, average-looking men and women. Each person was shown from head to knee, standing, with eyes focused on the camera. For each individual, the system paused, after which it presented the participant with two images, slightly different from one another, from which the participant had to choose quickly what he  or she thought was the original. One of the images had a slightly modified version of the original image that comprised a sexual body part.

“We always hear that women are reduced to their sexual body parts; you hear about examples in the media all the time. This research takes it a step further and finds that this perception spills over to everyday women, too,” Gervais said. “The subjects in the study’s images were everyday, ordinary men and women … the fact that people are looking at ordinary men and women and remembering women’s body parts better than their entire bodies was very interesting.”

If you thought it was the men solely that perceived women in such a manner, you’d be wrong. Both men and women come out with more or less the same results.

“It’s both men and women doing this to women,” Gervais said. “So don’t blame the men here.”

In a second experiment the same participants were presented with images of letters made up of other tiny letters  — an H made up of hundreds of little Ts, for example. Some were asked to identify the bigger, whole letters to test their global cognition, while other were asked to perceive the smaller letters that made up the big letter to test their local cognition. Participants involved in the global processing part of the test were less likely to objectify women, the researchers found. They no longer were better at recognizing a woman’s parts than her whole body.

The second test proves that objectifying women is a habit that came be overcome, suggest the scientists involved in the study.

“Our findings suggest people fundamentally process women and men differently, but we are also showing that a very simple manipulation counteracts this effect, and perceivers can be prompted to see women globally, just as they do men,” Gervais said. “Based on these findings, there are several new avenues to explore.

Findings were published in the  European Journal of Social Psychology.