About the creation of biofuel using CO2 from the atmosphere…

The misinformation going on in some fields of science is just staggering. For example, I woke up today to see my email, Facebook and even phone filled with messages about this new discovery that can use the CO2 in the atmosphere and transform it into biofuel. My first take on that was “Cool, a plant”. All plants take CO2 from the atmosphere and transform it into biofuel – so from the very start, something was fishy. 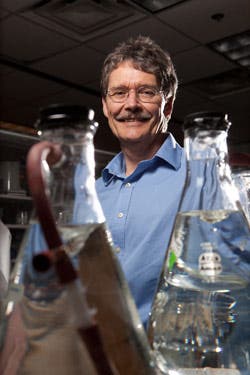 Of course, the idea was about something else. Researchers from the University of Georgia have found a way to transform the carbon dioxide trapped in the atmosphere into useful industrial products:

“Basically, what we have done is create a microorganism that does with carbon dioxide exactly what plants do-absorb it and generate something useful,” said Michael Adams, member of UGA’s Bioenergy Systems Research Institute, Georgia Power professor of biotechnology and Distinguished Research Professor of biochemistry and molecular biology in the Franklin College of Arts and Sciences.

Basically, they developed a technique that skips plants as the middleman, taking CO2 from the atmosphere and transforming it into useful materials directly. The entire process relies on a microorganism called Pyrococcus furiosus, which thrives in uper-heated ocean waters near geothermal vents. By manipulating the organism’s genetic material, Adams and his colleagues created a kind of P. furiosus that is capable of feeding at much lower temperatures on carbon dioxide. But it’s not all roses, and this is not a wonder solution. Here’s why.

Main problem is, you still have to input energy to get the CO2 out. According to the paper, this bacteria needs to be cultured at 95 deg C for 8 hours and then kept at 75 deg C – that’s a LOT of energy! Thatdoesn’t really strike me as being effective, especially considering how a rather similar method was described in 2009 – without requiring so much energy. Not to say that this isn’t a remarkable discovery – on the contrary. But the way in which is presented as a wonder… take your science with a grain of salt people, a dose of skepticism is always healthy. Except for ZME Science. You can just take everything from us, because, we’re good guys and all.