How the rich stay rich: social status is more inheritable than height

by Tibi Puiu
in News, Psychology, Research
Reading Time: 3 mins read
A A
Share on FacebookShare on TwitterSubmit to Reddit

UK researchers highlight once more a depressing topic: income inequality and lack of social mobility. After they tracked families that sent their children to study at Oxford and Cambridge – the two most prestigious and elitist Universities in the world since 1096 – the researchers found that students were more likely to inherit their parent’s social status than their height. In other words, your social status sticks with you almost just as good as the physical characteristics you inherit. Is that to say that rich or poor people are meant to stay that way, like it’s coded in their “genes”? There will always be rag to riches stories, but what the study concludes is that for most people, social mobility is extremely difficult.

The team made up of Gregory Clark of the University of California, Davis, and Neil Cummins of the London School of Economics, studied the surnames of English students who had attended Oxford and Cambridge in the past 800 years or so. Because the two universities have always been a haven for the elite, the attendance was used as a proxy for high social status. But what does surnames have to do with anything? Most surnames disappear or transform during the course of four to five generations as people get married and mix families. In fact, marriage is most likely the oldest form of social status manipulation. In the case of the elite, however, things are a bit different. Surprisingly, there’s so much you can learn about a person ony from a surname.

“For example, in England, we know the names of most people who went to Oxford or Cambridge from about 1200 right up until the present,” Clark says.

One might think the findings can be easily proven wrong. After all, posh students from Oxford and Cambridge might not be the most representative sample group for assessing social mobility. After Clark and colleagues checked to see how the situation holds in other countries, however, we now realize this is a global insight. A historical one, if I may add.

The team found the same numbers held true for England, Sweden, the United States, India, China, Japan and Chile. Even more startling, the correlation was the same in the Middle Ages as they are today.

“We can’t predict the individual aspects of where you’ll end up, but if we want to rank you overall in society, maybe as much as 60 percent of the outcome is determined at the time of conception,” Clark says.

Seeing how the industrial revolution or even the world wars haven’t change much about social mobility in the past couple of century, it’s hard to imagine what can. Yet, social mobility isn’t the same all over the world, being mostly tied to income inequality. The graph below, taken from a study by Miles Corak of the University of Ottawa, illustrates this. 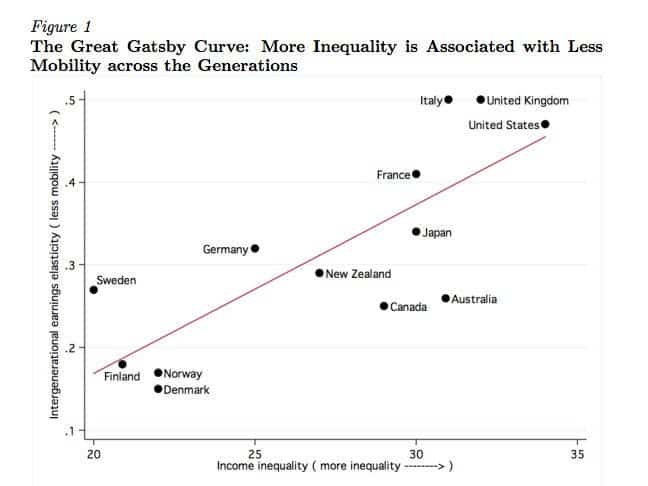