by Tibi Puiu
in Research, Studies 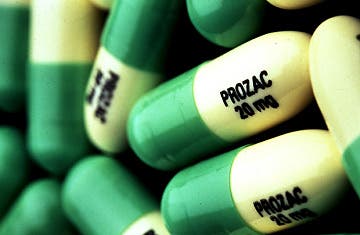 Researchers at the The Rockefeller University in New York City, have recently published a study which suggests painkillers such as the simple aspirin or ibuprofen could decrease the effectiveness of certain antidepressant medications.

Their research was conducted on mice, who were administrated with an anti-inflammatory drug (also called an NSAID, non-steroidal anti-inflammatory drug) and a selective serotonin reuptake inhibitor (SSRI, a type of antidepressant). After further tests, results showed that these mice scored lowered  when measuring antidepressant effectiveness than mice given only the SSRI, researchers found.

In the SSRI is the most widely spread antidepressant category, which includes the popular Prozac, which however aren’t always effective. Researchers believe this latest study might offer further insights as to why antidepressants don’t always work on certain people, for example those taking anti-inflamatory drugs.

And there’s this long therapeutic delay — you may need to take them for weeks or months, and even then some people don’t respond to them,” said the study’s lead author, Jennifer Warner-Schmidt. “What our data suggest is anti-inflammatory drugs may be one possible preventable reason for that treatment resistance.”

Scientists still don’t know how much anti-inflammatory drugs a person needs to take to counteract the antidepressants, especially since it would vary from person to person; and while it’s probably safe for a person on SSRIs to pop an Advil for a headache, more advanced use of anti-inflammatory medications like ibuprofen, aspirin and naproxen, pretty commonly seen in someone who suffers from chronic pain or arthritis, could counteract the effectiveness of the SSRI, researchers say.

Regarding the mice antidepressive tests some of you might be wondering how exactly do you screen results; I mean you can’t actually have a chat with a mouse about how he’s feeling and how his view upon life has been affected. What scientists did is they evaluated their performance on mobility tests, such as swimming, to see how their mood varied.

On the antidepressant alone, mice experience a 50 to 60 percent increase in mobility, while the anti-inflammatory drugs counteracted the antidepressants to the point where there was no longer a statistically significant improved result on the mobility tests.

“So you could basically say that there was no effect of the SSRI at all with the ibuprofen,” Warner-Schmidt said.

The data gathered in the mice experiments was correlated with past data from 1,546 people on antidepressants who participated in the 12-week STAR*D study, in which participants where asked to report their anti-inflammatory drug use, though it did not ask them to specify how frequently or how long they used those drugs.

More researchers is needed, but so far scientists have gathered enough statistical data that indeed point to the conclusion that anti-inflamatory drugs affect antidepressant use. From a reactionary point of view, it seems anti-inflammatory medications could counteract the antidepressants by inhibiting the production of a particular signaling protein, called p11.

In the next similar study, Warner-Schmidt said she hopes to do a placebo-controlled study in humans to see if the same effect observed in the mice also occurs in humans.