by Tibi Puiu
in Health & Medicine, Research, Studies
Reading Time: 3 mins read
A A
Share on FacebookShare on TwitterSubmit to Reddit 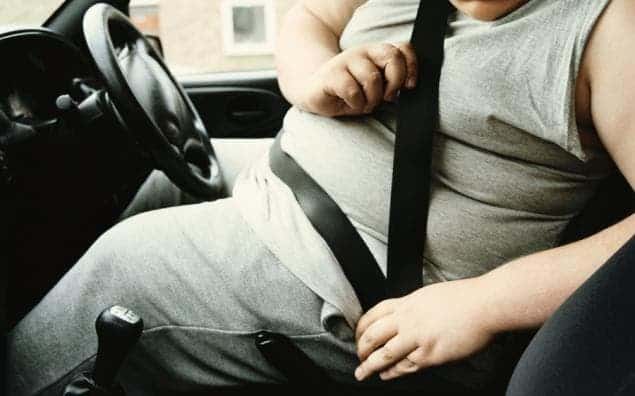 Researchers looked at data that described people involved in car accidents and, after balancing factors like airbag and seat belt, found that obese people are at a much greater risk of dying during a collision than people of normal weight. The study holds a rather important significance since it might prompt car manufacturers to rethink their designs in order to become more safe for obese individuals – currently around a third of all US adults.

Data from the  US Fatality Analysis Reporting System (FARS) for 1996 to 2008 was used, which reports all fatalities arising within 30 days of a traffic collision. The researchers decided to refine their study by only looking at collisions in which two passenger vehicles were involved, and for which the impact of the crash was the most harmful component of the incident, resulting in the deaths of one or both drivers.

In order for the study to be as relevant as possible, the researchers had to balance out all the other major factors that may result in a fatality during a car accident. So the researchers chose to only process data relating to collisions in which both parties had been driving vehicles of similar size and type. Some 3,403 pairs of drivers were selected for whom data on weight, age, seat belt use and airbag deployment were available. Of these 46% were of normal weight, one in three was overweight, and almost one in five (18%) was obese.

One in three was not using a seat belt properly – lap or shoulder only, rather than both – and in over half (53%) of cases, the airbag deployed. This important data was factored in, and after much data mining the researchers found that obese individuals were at much higher risk of dying as a result of the collision. The more overweight they were, the higher the change of succumbing, according to the researchers who classed the risk according to the World Health Organization classification, which categorises obesity from levels I to III.

In their paper published in the journal British Medical Journal, the researchers refer to a separate study to explain why such a higher risk of death occurs for obese individuals. According to the scientists, their lower bodies is propelled further forward on impact since the additional soft tissue prevents the belt from locking the pelvis , while the upper body is held back. This tug transfers large amounts of kinetic energy to the body which might cause death. Also, obese people are more likely to have underlying health problems, which coupled with injuries sustained during a car crash might ultimately cause death.

Another study performed by Canadian scientists at University of Laval that analyzed 800,000 records also came to similar conclusions.