by Tibi Puiu
in Physics, Research
Reading Time: 3 mins read
A A
Share on FacebookShare on TwitterSubmit to Reddit

While time can be viewed in very abstract terms, man has always been aware of it. Early man just needed to look towards the sky, at the sun and the moon, to instantly know that the Universe is moving forward and things are changing. Clocks, along with measures of time like the second, minute, years and so on, came much later out of a need to quantisize this inherent ability to sense change and entropy around him. As technology evolved, so has man’s need for more precise time keeping and for thousands of years clockmaking as evolved from pendulum-based, to mechanical, to digital and most recently to quantum-based means in order to accommodate this need. 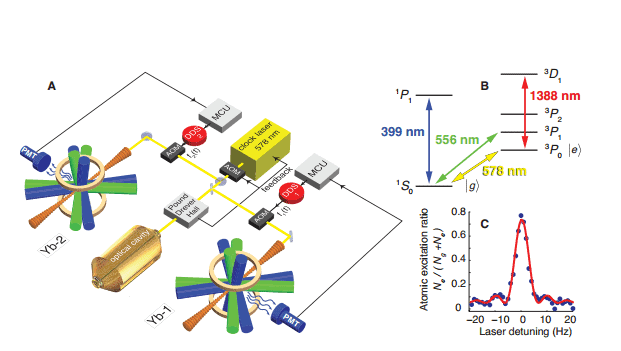 The most accurate clock was just recently unveiled by physicists at the National Institute of Standards and Technology in Boulder, which can keep time with an unprecedented precision of one part in 10-18, equivalent to specifying the age of the known universe to a precision of less than one second or Earth’s diameter to less than the width of an atom.

The working principle of the most precise clock in the world relies on measuring  the frequency of light emitted by an atom when electrons in the ground state jump to another state. To accurately measure this, however, the researchers had to overcome a number of physical phenomenae that interfere with measurements. Any small movement of the atom generates a Doppler effect that shifts the frequency, and then there’s also the Stark shift which also slightly changes atomic frequencies due to stray electric fields.

The error introduced by these quantum phenomenae are trivial and seemingly indistinguishable, but when you’re looking to keep track of time with unprecedented accuracy, everything needs to be accounted for. To build their clock while overcoming these issues, the researchers used a series of ingenious solutions.

A laser was used to bounce light off a mirror to create a standing wave of light which forms a lattice to trap atoms, since its essential to fix the atoms in certain position. The lattice is then filled with ytterbium atoms, and is then yet again zapped by another laser to see the frequency at which the electronic transition occurs. However, electric fields associated with the light generate a Stark shift. The team get around this by choosing a so-called “magic” transition in ytterbium in which both electronic states are shifted by the same amount, leaving the transition frequency unchanged.

The end result is a clock that can measure time loosing only one second for every billion billion seconds. How do you measure the accuracy of a single clock though? Simple, you build two, so that one of them keeps track of the other. Why do we need such accurate clocks though? Well,  time keeping is extremely important and without it, we couldn’t have reliable global positioning systems or synchronize networks and satellites (the military is especially interested in this).

Moreover, modern clocks, being so precise, can be used in a new array of applications never possible until recently. These clocks are so sensitive that they can easily measure the gravitational redshift, in which clocks tick more slowly in more powerful gravitational fields, essentially being capable of sensing changes in height. Clocks today in wide use can sense changes of many meters or kilometers. The clock made at  National Institute of Standards and Technology can sense changes in the order or centimeters.

The most precise clock in the world was described in a paper published in the journal Atomic Physics. [story via Tech review]