by Tibi Puiu
in Diseases, Health & Medicine, Research
Reading Time: 3 mins read
A A
Share on FacebookShare on TwitterSubmit to Reddit 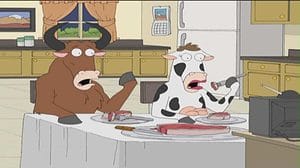 After analyzing thousands of tissue samples, scientists from the UK have found that there may be twice as many people carrying variant Creutzfeldt-Jakob prions – the human form of mad cow disease. According to the researchers, this is the most robust prevalence measure to date across a wide range of age groups.

Mad cow disease, or bovine spongiform encephalopathy (BSE), is a transmissible, slowly progressive, degenerative, and fatal disease affecting the central nervous system of adult cattle. By consuming beef containing infected nervous system, people risk developing variant Creutzfeldt-Jakob the human form of BSE. In the early stages of vCJD, people have symptoms related to the nervous system, like depression and loss of coordination. Later in the illness, dementia develops. But only in advanced stages of the disease can brain abnormalities be detected by MRI (magnetic resonance imaging). vCJD is fatal, usually within 13 months of the onset of symptoms.

Researchers believe that the infectious agent that causes mad cow disease is an abnormal version of a protein normally found on cell surfaces, called a prion. It was first identified after widespread human exposure to BSE prions in the late 1980s through contaminated meat products which caused a lot of panic among the general populace. Brief and compact period and areas of contamination have been experienced since followed of course by massive protective measures.

To determine the extent of people carrying variant Creutzfeldt-Jakob disease (vCJD) UK researchers examined more than 32,000 appendix samples from people of all ages who had their appendix removed between 2000 and 2012. They found 16 cases where the mad cow prior was present in the tissue, indicating an overall prevalence of 493 per million people. This means one in 2,000 are likely to be carriers (doesn’t mean they’re sick, but can pass on the risk of getting infected) or twice as many than previously thought.

Apparently, the prevalence of vCJD isn’t affected by geographic position, these findings also apply locally. It’s important to note that this significant prevalence doesn’t reflect the actual number of people suffering from the disease. “Although the disease remains rare, infection may be relatively common,” they note.

It’s rather unclear how many of these carriers will go on to develop the disease, and what are the risks of carrier transmission. The researchers plan on answering these questions by analyzing blood and tissue samples gathered before the 1970’s, prior the disease’s surfacing.

The findings were reported in the British Medical Journal.