How to get water from thin air

by Mihai Andrei
in Inventions, Materials, World Problems
A A

MIT and Chilean researchers working together have developed a fog harvesting system which can provide drinkable water for even the world’s driest regions.

In the full drought areas, where rainfall is extremely rare or virtually non existent, a few specialized plants and insects have devised ingenious strategies to cope with the harsh conditions and get the water they need – they pull it right out of the air, from the fog which drifts nearby. As it has been the case with many more other discoveries, the best we can do is mimic nature, and learn from it.

Fog harvesting (or fog collection), as the technique is known, is not a new idea – through condensation, atmospheric water vapour from the air naturally condenses on cold surfaces into droplets of liquid water known as dew. In the mid-1980s, the Meteorological Service of Canada (MSC) began constructing and deploying large fog collecting devices in Quebec, and other, smaller such initiatives have been taken across the world.

Chile has taken a special interest in this process; their intent was to use these devices to study the constituents of the fog that they collected, as well as using it. Some 50 such systems were deployed and used to irrigate seedlings on the hillside in an attempt at reforestation. Once vegetation became established, it should have begun collecting fog for itself, but the project, laudable as it was, failed to achieve self sustainability. It still provided very valuable information (and very valuable water), and now, with the help of MIT, the chilean fog harvesting program seems to enter a new stage.

Fog-harvesting systems generally consist of a vertical mesh, sort of like an oversized tennis net. The key to its efficiency are three basic parameters: the size of the filaments in those nets, the size of the holes between those filaments, and the coating applied to the filaments. In a new paper, MIT postdoc Kyoo-Chul Park PhD ’13, MIT alumnus Shreerang Chhatre PhD ’13, graduate student Siddarth Srinivasan, chemical engineering professor Robert Cohen, and mechanical engineering professor Gareth McKinley discuss these parameters and how they can be improved. 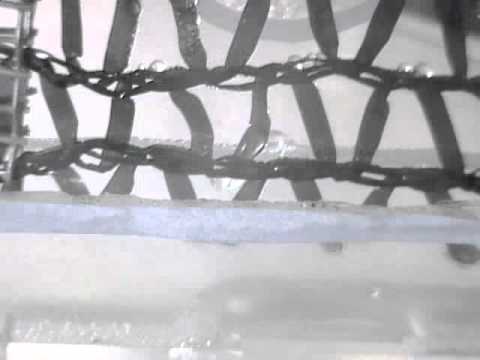 Typically made out of woven polyolefin mesh (a relatively cheap and easy to get plastic), they tend to have holes and filaments which are way too large. Due to this, they extract only 2 percent of the water available in mild fog; a finer mesh, they explain, could hold 10 percent, or even more. Then, you could deploy more nets behind each other to extract even more, if so desired. Controlling the size and structure of the mesh and the physical and chemical composition of this coating was essential to increasing the fog-collecting efficiency. According to their lab calculations, the best performance comes from a mesh made of stainless-steel filaments about three or four times the thickness of a human hair, and with a spacing of about twice that between fibers. Furthermore, the mesh should be coated in a solution that decreases a characteristic called contact-angle hysteresis, allowing small droplets to slide down easier into the collector before the wind blows them back into the fog. 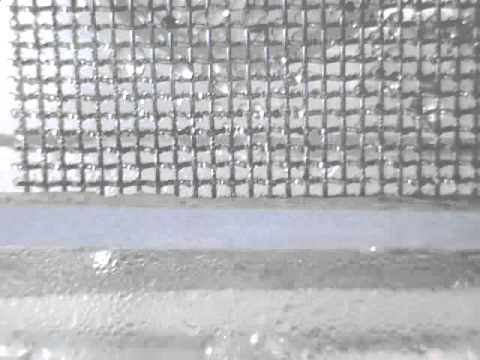 Theoretical calculations show that in the field conditions of the Chilean strong winds, these devices could yield up to 12 liters per day per square meter of mesh. This technique would be extremely useful in areas like the area north of Santiago, an area which gets very little rainfall, but which is regularly enshrouded in a strong windblown coastal fog. The team is now conducting a yearlong study to test the durability and effective water yield of the project.