by Mihai Andrei
in Home science, Research
A A 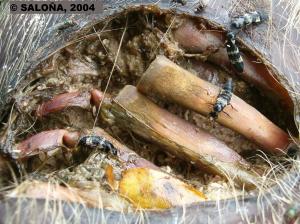 There is a need to train more and more forensic scientists. And more and more people want to be a part of the forensic thing. CSI series probably played a role in that. But lots of the forensic research part is not showed in the series – they just show the glitter, and most of the time misrepresent or alltogether ignore many scientific aspects which play a huge role in the whole forensic crimefighting technique. The tools and methods they use are made there. Insects sometimes give valuable information in a case and they are admitted as evidence in court cases. The forensic study of insects is named forensic entomology. They make up about half of the known animal species on our planet and they are found everywhere and eat anything.The insecs which have a big forensic value are necrophagous diptera; this means that their food is dead tissue or cadavers. They detect a dead body from a distance of several kilometres in minutes. Then they colonise the cadaver and lay their eggs there. In a matter of hours the larvae are born and the new individuals begin to develop, feeding off the cadaver until they reach full size. This is not nice but it does help find and put away the bad guys.

With the studies carried out to date, the researchers at the UPV-EHU have found out that there are differences between insects that live in urban areas and those in natural zones. The research team is undertaking a reference collection of insects of forensic interest, including their stages. This is a very important part of forensic research; it is part of the basis.