by Tibi Puiu
in Research, Studies
Reading Time: 4 mins read
A A
Share on FacebookShare on TwitterSubmit to Reddit 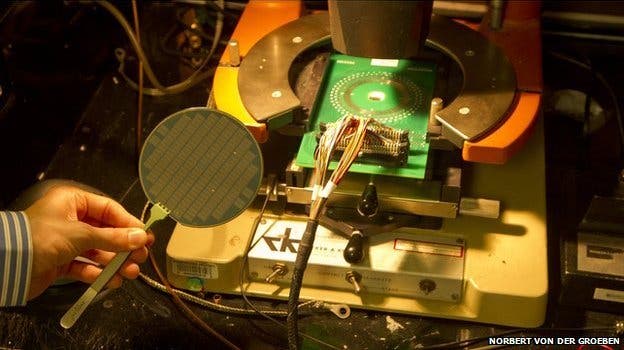 In an inspiring breakthrough, Stanford researchers have created the first ever working computer made entirely out of carbon nanotubes. The technology is still very infant, as the computer  operates on just one bit of information, and can only count to 32. Theoretically, however, it can be scaled up to perform billions of operations given enough memory.  With more refining, computers such as these hint towards a new digital age where carbon nanotubes reign supreme and silicon models are obsolete.

The prototype was dubbed “Cedric” and was made part of an extensive collaborative effort. Scientists have been trying to develop a working carbon nanotubes (CNTs) based machine for years, however past attempts have failed. The interest is huge because CNTs offer a wide array of intrinsic material properties far superior to silicon, the currently industry standard used in electronics. CNTs are basically rolled-up tubes of pure carbon only one atom thick. They’re fantastic electrical conductors and due to their incredible thinness, these can be employed as very efficient semiconducting materials capable of switching on and off electrical current flowing through very fast – a property indispensable for building working transistors.

Not that fast, not that stupid either

A number of challenges have kept previous attempts for developing a working computer from CNTs. For one, transistors made out of CNTs have been around for some 15 years already, the biggest problem however is lining and connecting these up. When CNTs are put on a wafer these aren’t perfectly aligned, and as such a machine would rend errors. The Stanford scientists used a method however that built chips with CNTs which are 99.5% aligned. What about the remaining 0.5%? Of course, the scientists din’t ignore this offset – after all it would have introduced a significant error in the resulting machine’s computations. Instead, they developed a neat algorithm that factored these misalignment our of computations.

Then, a second imperfection had to be overcome. Some of the CNTs have an inherent manufacturing imperfection that makes them exclusively metallic instead of semiconducting. This means these flawed CNTs always conduct electricity which is a big problem. The researchers employed an extremely simple, yet ingenious trick to overcome this. Since they could switch on or off the good, semiconducting CNTs, the researchers switched these off and pumped a lot of current into the circuit. The good CNTs weren’t touched at all since these were switched off, while the flawed CNTs vaporized from all the energy that went through. A perfect method for filtering out the flawed tubes. In the end they assembled their machine – Cedric – which works perfectly with no errors, even if it can only count on two hands.

“People have been talking about a new era of carbon nanotube electronics, but there have been few demonstrations. Here is the proof,” said Prof Subhasish Mitra, lead author on the study.

So far, Cedric is only a proof of concept and it’s quite bulky even by silicon standards – eight microns fat. Shrinking down the transistors will be the next obvious step. This doesn’t mean that it’s a sort of herculean task. Far from it – the technology necessary to scale up Cedric to say 64 bit with nanoscale transistors is well in place. It’s just a matter of trial and error before the scientists can get this moving. In a matter of years we may actually be able to type on a CNTs computer. In fact Cedric is already capable of achieving any task – it just needs more memory!

“In terms of size, IBM has already demonstrated a nine-nanometre CNT transistor.

“And as for manufacturing, our design is compatible with current industry processes. We used the same tools as Intel, Samsung or whoever.

“So the billions of dollars invested into silicon has not been wasted, and can be applied for CNTs.”

Silicon, the most employed material in electronics, has served mankind well. It’s cheap, durable and efficiency, however the material is reaching it’s absolute limits. It can only be shrunk so much, and for computing power to grow you need as many transistors as you can crammed up on minimally large surface. Carbon nanotubes are considered key by many industry experts into breaching the silicon limit and allow Moore’s law to still remain valid.