Earliest Buddhist shrine uncovered right at the birthplace of Buddha

by Tibi Puiu
in Archaeology, Discoveries, News, Research
Reading Time: 2 mins read
A A
Share on FacebookShare on TwitterSubmit to Reddit 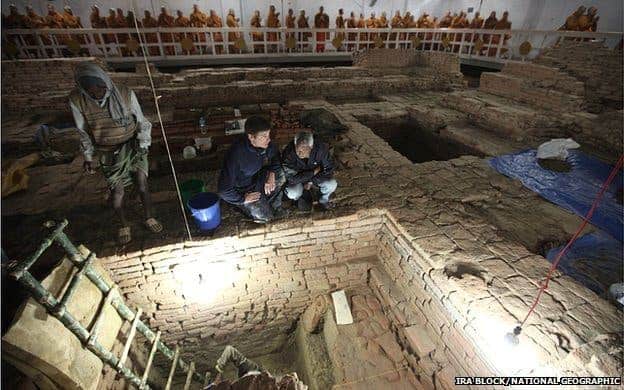 At one of the sites where it’s possible that Buddha was born, archaeologists have identified the remains of an ancient shrine – a timber structure which used to encircle a tree – right at the heart of the present day Maya Devi Temple in Lumbini, Nepal. Carbon dating reveals this ancient structure is at least 2500 years old, making it the earliest Buddhist shrine uncovered thus far while also giving credence to the legends and timeless fables that speak of Buddha’s birth and early life.

Like with all ancient prophets and holy men, the exact historical context of Buddha is subject to debate. Most scholars believe the “the englightened one” was brought to this world some time between 390-340 BC, while the earliest evidence of Buddhist structures at Lumbini, Buddha’s supposed birth place, have been dated no earlier than the 3rd century, during the rule of emperor Ashoka who enshrined Buddha’s cremated remains into 84,000 stupas.

At the heart of Lumbini temple, however, archaeologists have unearthed an ancient wooden structure that may alter current theories relating to Budda’s life and birth. Inside the wooden structure, a void was identified that had no roof above it and where signs of ancient tree roots were discovered suggesting this was a tree shrine. Later on, brick temples were built around this tree shrine structure.

“Now, for the first time, we have an archaeological sequence at Lumbini that shows a building there as early as the 6th century BC,” said archaeologist Prof Robin Coningham of Durham University, who co-led the international team, supported by the National Geographic Society.

Before becoming Buddha, which means “awaken one” in sanskrit, first came Siddhārtha Gautama. Gautama was the son of Śuddhodana, “an elected chief of the Shakya clan”, and Queen Maha Maya (Māyādevī). Legend has it, Gautama was born on the way, at Lumbini, in a garden beneath a sal tree. Could this shrine had once housed the said ancient tree?

“This is the earliest evidence of a Buddhist shrine anywhere in the world.

“It sheds light on a very long debate, which has led to differences in teachings and traditions of Buddhism.

“The narrative of Lumbini’s establishment as a pilgrimage site under Ashokan patronage must be modified since it is clear that the site had already undergone embellishment for centuries.”