by Mihai Andrei
in Animals, Discoveries
A A

Measuring only a fraction of a coin, these tiny frogs were discovered hopping around in the tropical forests of Papua New Guinea. 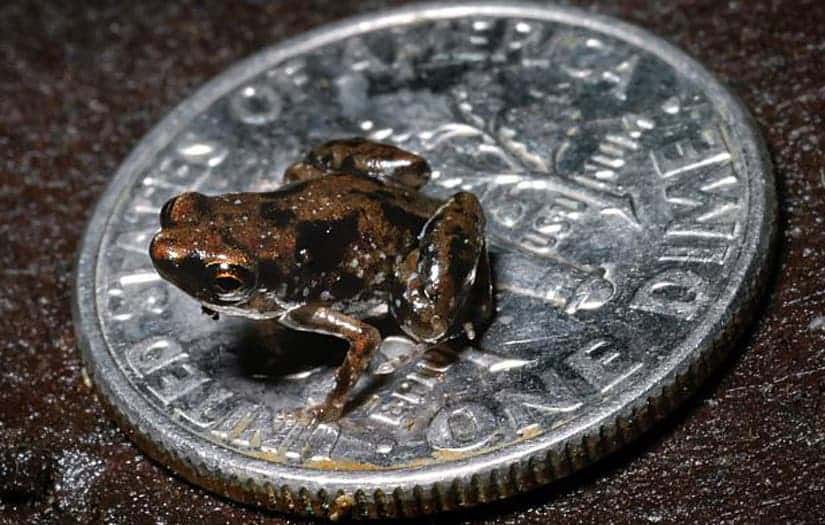 But small as they are, they have really big names: Paedophryne amauensis and Paedophryne swiftorum are the smallest vertebrates found so far, according to the report published in PLoS one. Until now, that title was held by a small fish in Indonesia, which averaged 8 millimeters in length, but these little land frogs come in at a whopping 7.7 mm, as opposed to the blue whale, the biggest vertebrate, which measures about 25.8 meters.

“It was particularly difficult to locate Paedophryne amauensis due to its diminutive size and the males’ high pitched insect-like mating call,” says Louisiana State University scientist Chris Austin, who discovered them. – “But it’s a great find.”

The animals have probably existed for a lot of time, but it was just hard to find them. They also help put previous findings in perspective, showing them to be logical developments, instead of evolutionary oddities.

“The ecosystems these extremely small frogs occupy are very similar, primarily inhabiting leaf litter on the floor of tropical rainforest environments,” says Austin. “We now believe that these creatures aren’t just biological oddities, but instead represent a previously undocumented ecological guild – they occupy a habitat niche that no other vertebrate does.”