Slime can navigate using external memory, despite having no brain – a precursor to the nervous system?

by Tibi Puiu
in Animals, Discoveries

Scientists at University of Sydney have been studying for the past few years one of the most peculiar events in nature. It seems that a living slime, no less, no more, is capable of reading information and remembering its past “steps” acting on some sort of external memory, this despite the fact that it has no brain, not even one single neuron. The researchers believe that the slime’s mechanism might actually be one of the initial precursors of the most primitive nervous system.

The slime mold the Austrilian scientists studied is  Physarum polycephalum, an odd creature with a nucleus and complex cells, but still miles away from multicellular animals; for comparison its close cousin is the famous lab guinea pig the Amoeba. When there’s food about, the slime stays as a single cell organism, however when food is scarce, it binds to other such slime cells morphing into an multi-nuclei organism visible with the naked eye, with a single purpose and direction. Scientists have found this to be advantageous, as the slime is able to move more efficient and  increase its chances of finding food when sticking together.

“The slime mold leaves behind a trail of slime everywhere it goes, which it can then detect later to recognize areas it has already been,” said biologist Chris Reid.

You don’t need a brain to find your way around

What’s curious however, is despite it having absolutely no neurons whatsoever, the slime is capable of remembering where it’s been before, and more than that – it’s capable of moving through an optimal path and reach a food resource. Researchers were fascinated by this behavior and put the organism to the test in a control environment. First the slime was put at the edge of an Y shaped maze, where food was put on both ends of the container, but with one of the Y arms already covered in slime trail. The results were staggering – in 39 of the 40 tests they ran, the slime mold avoided the arm that was pre-slimed.

“Even an organism without a (central) nervous system can effectively navigate complex environments,” the researchers write. 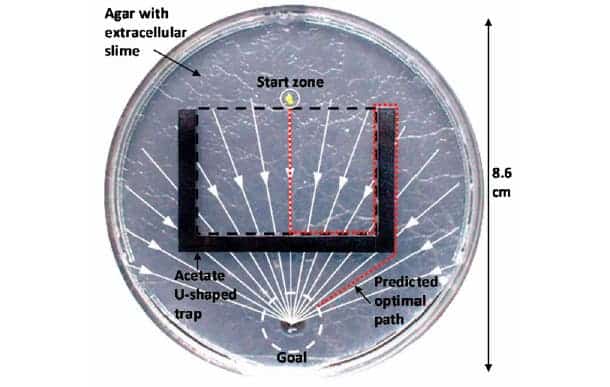 Next, the researchers put the slime to a more difficult test, and placed it in a similar container, this time U shaped, a pattern usually used for testing robots.  Physarum starts at the top, middle portion of the U-shaped container and ss tasked with reaching its goal, located beneath the U container where a sugar rich food source is located. The whole set-up is placed in a jelly environment inside a petri-dish. Since sugar diffuses inside the jelly, it creates a gradient which the slime remarkably can sense and follow to reach the sugar rich food source.  On an untreated surface, 96 percent of the specimens were able to steer through the trap to find a sugar solution within before the time limit of 120 hours. Then, the researchers covered the entire setup in slime so the mold had no way of telling what areas it had already visited, only about a third of the organisms succeeded in making their way to the food.

“The slime mold’s behavioral response strongly suggests that it can sense extracellular slime upon contact, and uses its presence as an externalized spatial memory system to recognize and avoid areas it has already explored,” the researchers write.

What this tells us is that the slime mold has somehow developed the ability to read its tracks and tell if its been in a place before or not; this way it can save energy and not forage through locations where effort has already been put. The scientists believe this externalized spatial memory could have been used by primitive organisms to solve the same types of problems more complex organisms are confronted with. Previous research has shown that slime mold can also solve mazes and anticipate periodic events. Maybe a similar organism, one of our very first forefathers, developed the very first brain cells after expanding from a similar external memory.

Findings were documented in the journal PNAS.