Crabs can feel pain and remember the experience, study shows

by Mara Bujor
in Biology, Discoveries, Research, Studies
A A 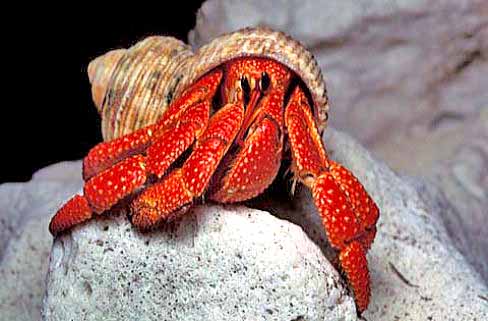 Probably the first thing to come to your mind when you hear about crabs is “tasty”. However, a study comes to show that these sea creatures are far more complex than previously thought; it seems that the little guys can feel pain and more than that, keep a memory of it. This means that the way crabs are treated before ending up in our plates should be changed. Good news for the crustaceans apparently.
Hermit crabs, the ones used throughout the study, have no shell to protect them, so they usually live in empty mollusk shells. The scientists attached wires to such shells in order to deliver small electrical shocks to the crabs who tried to use them as home.
Only the crabs who had received such a shock got out of the shell, this meaning that they disliked the sensation; as central neuronal processing was involved, this couldn’t have been a simple reflex.

As this species of crustaceans is known to prefer some shells to others, they were more likely to get out of the ones they liked the least.

The goal of the experiment however, was to deliver a shock just under the threshold that would determine a crab to “move house” in order to see what happened if a new shell was offered.

The crabs who had received a shock, but remained in the old shell proved to be more likely to move fast into the new one, investigate it and then remain in it than the others who had not found themselves in an unpleasant situation. This means that the experience of the shock remained in the memory of those who had suffered pain.

The results of the study seem to answer an old question: do crustaceans feel pain? Even though previous studies have shown that they were able to detect stimuli that could produce harm, their withdrawal from the source was considered a reflex as there was no proof of them feeling pain or anything similar to it.

The fact that the crabs rejected a shell so as to find one which would protect them from pain can be compared with reactions found in vertebrates, especially as other motivational factors were involved; let’s think about humans; one may drop a hot plate if it’s hot, but may hold it in the same situation if it contains food.

A previous study found that prawns showed prolonged rubbing if one ontenna got in contact with weak acetic acid, but that the rubbing was reduced  by using local anesthetic.

All results are consistent with the ones obtained by studying mammals, but despite this fact crustaceans receive no protection even though millions of them are used in industry and research. Legislation to protect them was proposed, but only in the scientific domain. The main cause seems to be the false presumption that crabs and similar species cannot feel pain. So maybe the time for a change has come.