by Mihai Andrei
in Health & Medicine, Research
A A 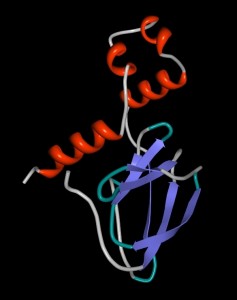 The war on cancer is more intense than ever, and it’s taking place on many, many fronts. We’ve seen the anticancer minisubmarine, the anticancer trojan horse, and even the anticancer beer. In a study published in the first issue of EMBO Molecular Medicine, Canadian researchers showed there is yet another way to tackle cancer: re-engineering proteins.

By doing this, they prevent tumours from spreading and growing and thus paving the way for a very powerful weapon in cancer therapy pointing out that better ways to treat it than chemo and surgery are closer and closer. Here’s what happens, at the most elementary level.

When tumours grow, they have a very disorganised blood supply, which is not quite as big as they would need. So as a result, some areas around the center of the tumour are not getting enough oxygen; areas without enough oxygen are called hypoxic. Cells in these hypoxic areas produce hypoxia-inducible factor (HIF) that keeps them growing. The bigger this factor is, the aggresivity of the cancer increases. The von Hippel-Lindau (VHL) protein degrades HIF under normal conditions, but it’s ineffective in hypoxic areas, so where it is needed the most, it provides the least.

So the researchers created a new version of this protein that doesn’t stop when oxygen is a scarce resource.

“We have genetically removed the Achilles’ heel of VHL to permit unrestricted destruction of HIF,” says lead researcher Professor Michael Ohh, who works in the Faculty of Medicine at the University of Toronto. “The level of HIF is usually very high under conditions of low oxygen, but when we put in our bioengineered VHL its levels go right down to a level that would be comparable to that in normal oxygen levels.”
“We used kidney cancer as a model because it is one of the most resistant tumours to conventional radiation and chemotherapy, but our findings provide a novel concept that could potentially serve as a foundation for smarter anti-cancer strategy for a wide variety of cancers,” says Ohh.