by Tibi Puiu
in Diseases, Health & Medicine
Reading Time: 3 mins read
A A
Share on FacebookShare on TwitterSubmit to Reddit 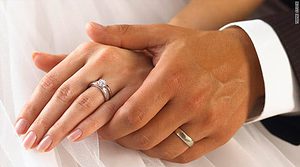 A Harvard longitudinal study that looked at 734,889 people who were diagnosed with cancer between 2004 and 2008 found that married patients were more likely to recover that those that weren’t. The findings don’t particularly suggest that the emotional support itself helps with the healing, but rather the attention offered by the spouse typically prompts patients to seek treatment earlier and stick with it. The fact patients tended to have cancers diagnosed at an earlier stage supports this idea.

“Our data suggests that marriage can have a significant health impact for patients with cancer, and this was consistent among every cancer that we reviewed,” said Ayal Aizer, chief resident of the Harvard Radiation Oncology Program and the paper’s first author. “We suspect that social support from spouses is what’s driving the striking improvement in survival. Spouses often accompany patients on their visits and make sure they understand the recommendations and complete all their treatments.”

The analysis factored in a  number of demographic factors, including age, sex, race, residence type, education, and median household income and adjusted these for relevance. The Harvard researchers found unmarried patients, including widowers, were 17 percent more likely to have metastatic cancer (cancer that spread beyond its original site) and were 53 percent less likely to receive the appropriate therapy. The findings held true for all forms of cancer, including the leading causes of cancer related deaths like lung, colorectal, breast, pancreatic, prostate, liver/bile duct, non-Hodgkin lymphoma, head and neck, ovarian, and esophageal cancer.

It’s important to note that social support is the key phrase that leads to better cancer outcomes and not marriage itself. Family, friends, co-workers could all fill in the role of a spouse for instance and offer the necessary support and incentive for the patient to engage in proper treatment – most importantly, as early as possible. It’s just that spouses are always there for good or for worse. Wit this in mind, patients should seek and accept support whenever the opportunity presents itself.

“We don’t just see our study as an affirmation of marriage, but rather it should send a message to anyone who has a friend or a loved one with cancer: By being there for that person and helping them navigate their appointments and make it through all their treatments, you can make a real difference to that person’s outcome,” said the study’s senior author, Paul Nguyen, a radiation oncologist at Dana-Farber and Brigham and Women’s, and an assistant professor at Harvard Medical School. “As oncologists, we need to be aware of our patients’ available social supports and encourage them to seek and accept support from friends and family during this potentially difficult time.”