by Tibi Puiu
in Biology, Research, Studies
A A

In a classic David vs Goliath scenario, scientists have observed how the Epomis beetle larvae simply devour frogs, several times larger than the larvae. Thus the pray has become the predator, and vice versa, as the initial predatory frog finds itself sucked out of his lifeline by the larvae until nothing by a sac of bones remain.

It’s a truly freaky turn of events, but which by no means can be considered accidental or isolated – on the contrary. In what can only be considered a very tricky evolutionary maneuver, squirmy larvae cunningly attract frogs or toads by posing as dead meat, wiggling its antennae and jaws in an enticing pattern. These movements become more intensive as the would be predator approaches – like a dance. Whose the hypnotoad now?

Enticed by this ‘siren call’, before the amphibian can get a clue of whatever’s happened, the beetle larvae suddenly eludes its predator and attaches on to the nearest surface of the frog’s body. From there on it starts sucking and draining. In some rare cases, frogs actually manage to swallow the larvae, only to regurgitate them out after a short while, time in which the larvae takes another swing and actually kills the frog.

In one “extraordinary” case, wrote Tel-Aviv University study researchers Gil Wizen and Avital Gasith, a larva survived in the stomach of an amphibian for two hours before the larger animal vomited it back up.

The following video has been produced by Tel Aviv researchers, who recorded a live beetle larvae-frog encounter. It’s kinda graphic, so click at your own risk. 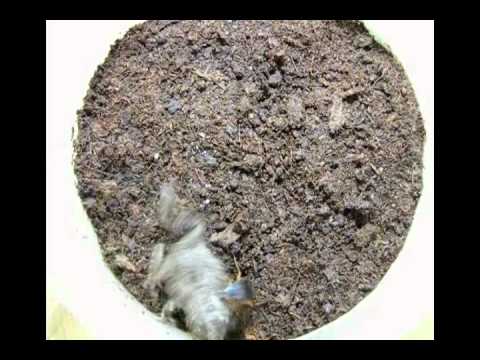 Frogs, hopeless in front of the larvae

Generally, ground beetles are a tasty, easy pray for frogs and toads, but for some time now researchers have noticed that the larvae of some species of ground beetles can be terribly ruthless on their own terms. To better observe this behavior in a controlled environment, researchers collected the larvae of two ground beetle species, E. circumscriptus and E. dejeani, and placed them in containers with a variety of frog and toad species.

There were 382 separate tests, and on each account the amphibian turned out dead. Only seven frogs and toads managed to swallow the larvae, but in each case, the amphibian quickly threw up its would-be meal. The regurgitated larvae quickly rallied and attached themselves to the amphibians’ mouths. At an 100% fatality rate, the beetle larvae are some mean, deadly critters.

“This study started as a side-study while checking the population status of toads in the coastal plain of Israel,” said Wizen who worked on the research in the lab of Avital Gasith at Tel-Aviv University. The phenomenon was first discovered in 2005 by Eldad Elron and Alex Shlagman.

“In Israel there are only six amphibian species and all of them are threatened by extinction,” he said.

The research was published Sept. 21 in the online edition of PLoS ONE.