by Tibi Puiu
in Animals, Other

In 1982, a local resident of Bletchingley, about 20 miles south of London, found the remains of a pigeon while cleaning his home’s chimney. Among the remains, the man found a red cylinder that contained a single sheet of paper marked with 27 codes, each comprised of 4 to 5 characters, delivered through the famous British Pigeon Service most likely sent from Normandy during D-Day or aftermath. What’s interesting though, is that even after thirty years and massive technological advancements, the code can not be read.

The only parts of the message that could have been deciphered so far are the note’s sender, “Sjt. W Swot,” and its code-named recipient, “xo2″ — believed to be British Bomber Command. As many as 250,000 pigeons were trained by the RAF during World World II, which were organized under a specialized unit called the National Pigeon Service. The birds showed their value on numerous occasions, especially when radio communications were down or ultra covert-operation details needed to be conveyed. A reported  32 pigeons were awarded the Dickin Medal, Britain’s highest possible decoration for valor given to animals, during the war.

The reason why the code can’t be cracked as of yet is because it’s been made using a one-time pad — a method of encryption that is difficult to crack without knowing the key.

“The advantage of this system is that, if used correctly, it is unbreakable as long as the key is kept secret. The disadvantage is that both the sending and receiving parties need to have access to the same key, which usually means producing and sharing a large keypad in advance,” Government Communications Headquarters officials said.

“This means that without access to the relevant codebooks and details of any additional encryption used, it will remain impossible to decrypt the message,” they said. 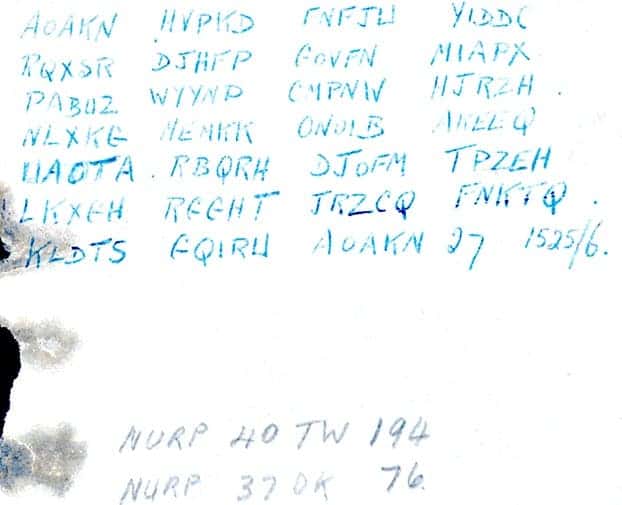 The pigeon in question was found in a home just five miles away from Bletchley Park, where British WWII code-breakers were stationed. The bird must have felt tired and stopped by the chimney to get warm, noxious fumes may have caused it to collapse and eventually meet its end. Most likely, the message will remain unreadable until a member of the operation, if still alive or able, might offer information towards its deciphering.

”We didn’t really hold out any hopes we would be able to read the message,” said Tony, a GCHQ historian who asked to be identified by first name only, to the BBC. “Unless you get rather more idea than we have of who actually sent this message and who it was sent to we are not going to find out what the underlying code being used was.”