Curious what a Tesla battery rack looks like inside? Watch these guys throw one off the roof to find out

I mean, it's a pretty solid method.

by Alexandru Micu
in News, Tech, Videos
A A

Ever wondered how Tesla’s tech can power an actual car for whole trips? What secret their batteries might hide? If so, you’re in luck, as the father and son duo of “What’s Inside” shoot, smash, and slash their way inside the things to show us what’s going on.

Dan and his son Lincoln, the creators behind YouTube channel “What’s Inside“, sadly had to let their family car go, a Model S Tesla. They’re pretty bummed about it but decided to make the most of a bad situation and study the company’s impressive battery tech. In the best way possible: with smashing, slashing — and arrows. Check it out. 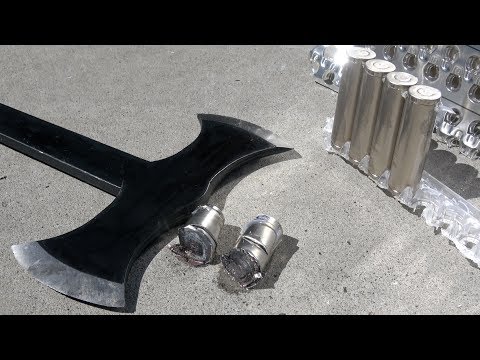 Wondering if a Tesla battery rack would fare better than muggle batteries (which blow up) when pierced, say by a random piece of jagged metal lying on the road, the duo first shoots their spare Tesla battery rack with a bow and metal-tipped arrow. They were hoping for ‘some kaboom’, but thankfully (sadly?) Tesla makes them pretty safe so it doesn’t really happen. The arrow lodges between the rack’s metal casing and the cooling strip, does structural some damage but nothing really pops.

Not ones to be daunted so easily, they move on to the next logical step — Lincoln takes the rack and throws it off the roof. Twice.

Pressed this hard, the battery rack submits and breaks off into a hundred tinier batteries, which finally gives us a good look at Tesla’s design. The rack is a very neat structure, with stacks of batteries interwoven with cooling strips, all encased in a plastic and metal structure. Every one of them comes with its own integrated computer which ensures the batteries do what they’re supposed to while being extra-duper-safe. Each Model S carries around 16 such racks, for a total of about 7000 individual lithium batteries.

In the end, Dan had to hack away at the batteries with a hatchet so we could actually see what’s inside. Not very surprisingly, it’s battery acid.

And because we care (also because lawsuits are expensive) please don’t try this at home. Dan and Lincoln aren’t professionals, but they had a whole bunch of them on standby to make sure nothing went haywire.