Watch: the first short film written completely by an AI

It's surreal and it doesn't make much sense, but it's definitely intriguing.

by Mihai Andrei
in News, Offbeat, Videos
Reading Time: 4 mins read
A A
Share on FacebookShare on TwitterSubmit to Reddit

It’s surreal and at times it doesn’t make any sense, but it’s just captivating:

Watch this on The Scene.

If you don’t know what to make of this, then neither do we. Sunspring is a short science fiction film about people living in a weird future, where most things aren’t what they seem – or at least seem to be what they’re not. The three protagonists seem to be trapped in some kind of love triangle, with H (played with neurotic gravity by Silicon Valley‘s Thomas Middleditch) and H2 (Elisabeth Gray) wearing shiny gold jackets and not understanding much of what each other is saying. The third one, C (Humphrey Ker) announces that he has to “go to the skull” (or “the Skull”?) before swooping in to take the girl. But the movie itself is even weirder.

That’s because unlike any other movie, it wasn’t written by a human, but by an algorithm, an artificial intelligence (AI). The AI in case is a recurrent neural network called long short-term memory, or LSTM for short – but it prefers being called Benjamin.

Benjamin completely wrote the screenplay, along with some borderline impossible acting instructions such as “He is standing in the stars and sitting on the floor.” Director Oscar Sharp made the movie for Sci-Fi London, an annual film festival which gathers talented filmmakers from all around the world. They placed in the top 10 from hundreds of entries, but this was probably skewed by one judge, award-winning sci-fi author Pat Cadigan who said, “I’ll give them top marks if they promise never to do this again.”

But the festival story got even more interesting. At the end of the festival, members of the audience were given a chance to vote for their favorite. Ross Goodwin, the AI researcher from New York University who supplied the movie’s AI writer, realized that something was wrong: some entries were getting too many votes. They were cheating. So he decided to do the same, and had Benjamin vote for himself thousands of times at the last minute, easily winning the entire competition. Of course, they confessed immediately after that. Sharp recalled:

“So we had him vote 36,000 times per hour in last hours of the contest, and he crushed the cheaters.”

Louis Savy, who runs the film festival thought this was hilarious, so he interviewed Benjamin on stage during the award ceremony, and the interview was just as eerie as the movie itself:

What do you think of your historic nomination against human opponents in this contest?
I was pretty excited.
I think I can see the feathers when they release their hearts. It’s like a breakdown of the facts. So they should be competent with the fact that they won’t be surprised.

What is the future of machine written entertainment?
It’s a bit sudden.
I was thinking of the spirit of the men who found me and the children who were all manipulated and full of children. I was worried about my command. I was the scientist of the Holy Ghost.

What’s next for you?
Here we go. The staff is divided by the train of the burning machine building with sweat. No one will see your face. The children reach into the furnace, but the light is still slipping to the floor. The world is still embarrassed.
The party is with your staff.
My name is Benjamin. 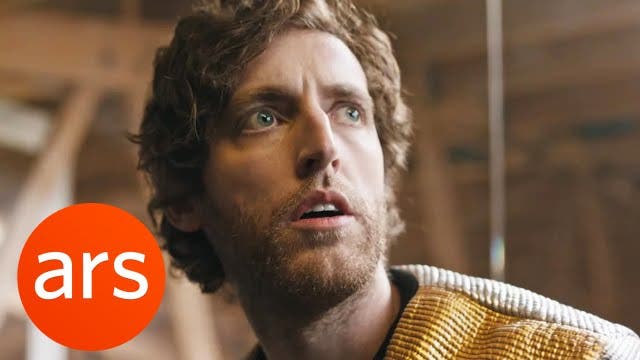 But while this was a neat project and definitely entertained participants to the movie festival, it raises some interesting points. The main point is that most of our sci-fi films fall into the same stereotypes. The AI was fed scripts from popular SF movies, and it came up with a script that’s gibberish, and yet somehow seems to make sense (at least at some level). Also, the way the actors interpreted the script also reveals the same thing. The love triangle wasn’t visible in the script, but all the actors envisioned it happening – and if you watch the movie, it’s quite evident. The whole atmosphere, with the music and eerie visuals is also a common theme.

“I just finished a sci-fi screenplay, and it’s really interesting coming off this experience with Benjamin, thinking I have to have somebody say ‘What the hell is going on?’ Every time I use his tropes I think, oh of course. This is what sci-fi is about.”

In the end, we won’t be having any computer-written blockbusters anytime soon, but AI snippets like this one are intriguing and – why not – quite enjoyable.