A flood of biblical proportions.

We all know just how devastating Harvey was, but seeing it in a video is still impressive. Footage starts at approximately 9:30 pm on August 26th and ends around noon on August 27th. Things get crazy around 00:20, and stay tuned to see one car going bananas and someone attempting to take their vehicle out of the parking lot through the flood. 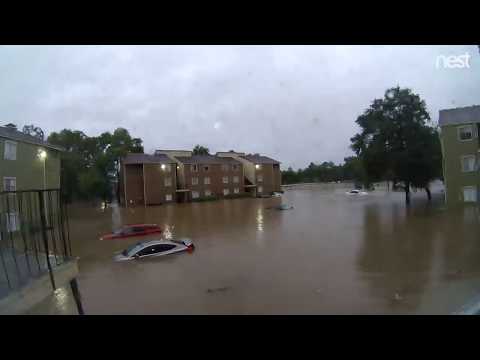 Hurricane Harvey was the first major hurricane to make landfall in the US since 2005, and it left a big scar. At least 64 people were killed, though that number is expected to rise significantly. Over 30,000 people had to be displaced, 300,000 people were left without electricity, and billions of dollars of property damage was sustained. Moody’s Analytics has estimated the total economic cost of the storm at between at $81 billion to $108 billion — or more.

It’s not clear whether or not this is even connected to climate change. Global warming itself doesn’t affect the incidence of hurricanes, but certain parameters of these storms are affected. It seems highly probable that this warming exacerbates extreme events. In a briefing, the World Meteorological Organization stated that the quantity of rainfall from Harvey had very likely been increased by climate change.