by Tibi Puiu
in News, Videos
A A 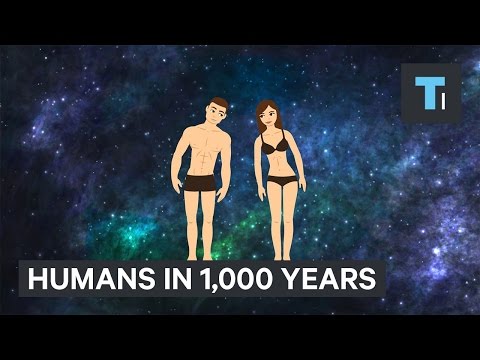 It’s difficult to envision what humans might look like in a century, let alone in a millennium but this recent video produced by Tech Insider does a pretty good job. Here are some of the highlights:

Even if we don’t undergo artificial genetic enhancements, there are already many signs that point to features that are set to change or become more prevalent in the human species. Writing in a thread on a Quora, Matan Shelomi, organismic and evolutionary biologist, shares what the science says so far about what humans will look like 100,000 years from now.

All life on earth is constantly evolving; the process doesn’t stop. As living things, humans are still evolving. Since we became Homo sapiens, has evolution changed us in any way? Actually, yes.

Thousands of genes have evolved recently (in the last 40,000 years). Changes we are seeing include smaller brains (more efficient, not dumber), resistance to diseases, increases in ADHD and blue eyes. Yes, blue eyes. Genetic analysis says the first blue-eyed human appeared 6,000-10,000 years ago somewhere in the Black Sea region. For whatever reason, the phenotype became very popular (conferring a 5% greater chance for reproduction) and today about half a billion blue-eyed folk exist.

Another famous example is HgbS (sickling hemoglobin), a gene that makes humans immune to malaria. Malaria is the number one killer of humans, so it makes sense that a mutation eventually arose that makes human red blood cells resistant to the malaria parasites, and for the gene to rise in frequency in malaria-prone populations (sub-Saharan Africa). Unfortunately, the same gene also causes sickle cell anemia. We all have two copies of every gene in our body (one from mom, one from dad), and if one copy is the malaria-resistant mutant HgbS, you’re fine, but if both are the mutant, you get sickle cell disease. The good news is that many other genes confer resistance to malaria, and we are also seeing leprosy and tuberculosis resistance genes appearing, too.

Another example is the gene for lactose tolerance. Primitive man would drink milk as a baby, and then never again, so the amount of lactase enzyme (which breaks down a common sugar in milk) would fall after a few years of age. Over time, however, humans have evolved so that certain populations will keep producing the enzyme into late adulthood. As expected, the lactose-tolerant trait appears most often in the regions where dairy farming arose first and became an important part of the diet (Caucasians). Tolerance for milk is supposed to have evolved only 3,000-8,000 years ago, and is now found in nearly 95% of North Europeans.

Our mouths are changing, too. They are getting smaller and more bullet-shaped. Our teeth aren’t quite changing as fast, which is why orthodontics and wisdom teeth removal still exist … for now. More and more people are being born without wisdom teeth, or have their wisdom teeth erupt later if at all. Wisdom teeth were useful before knives and cooking, when humans would probably lose molars to chewing hard food and needed the wisdom teeth as replacements. Today, 35% of people lack wisdom teeth, although the genes involved in this are unknown so we aren’t quite sure why this is happening yet.

So what will we look like 100,000 years from now, assuming we still exist that far in the future? Even if we ignore new technologies, moving off the earth, and various selection pressures, evolution still holds surprises just by chance mutation. Ten thousand years ago nobody had blue eyes. Who can guess what evolution has in store for us ten thousand years hence?