Whether it’s due to novels and movies or some morbid fascination, more and more people seem to be fascinated about vampires. Still, when people first started to believe in them, things were quite different from now.

For example, instead of drinking blood, it was believed that they chewed on their shrouds of people that died, and at that time, it seemed that was how the plague was spreading (or at least it was an idea). To prevent them from doing this, grave diggers put a brick in their mouth. This was probably caused by the fact that sometimes blood is expelled from the mouths of the dead, which causes shroud to sink inwards and tear. 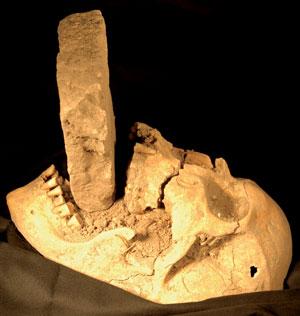 Now Matteo Borrini of the University of Florence in Italy found such a skeleton with a brick in its mouth while excavating some graves of plague victims from the Middle Ages near Venice. According to his claims, this the first vampire that was examined forensically.

Still, there are those who oppose this idea, such as Peer Moore-Jansen of Wichita State University in Kansas. He claims he has found similar skeletons in Poland, and he says that while this finding is in fact very exciting, “claiming it as the first vampire is a little ridiculous”. The response was short but firm: it’s the earliest grave to show “exorcism evidence against vampires”.