by Mihai Andrei
in News, Offbeat
Reading Time: 4 mins read
A A
Share on FacebookShare on TwitterSubmit to Reddit

Archaeologists working in Madagascar have uncovered the treasure hidden by the notorious pirate Captain Kidd – and they have the loot to prove it: a 50 kg silver bar they presented to the president of Madagascar. 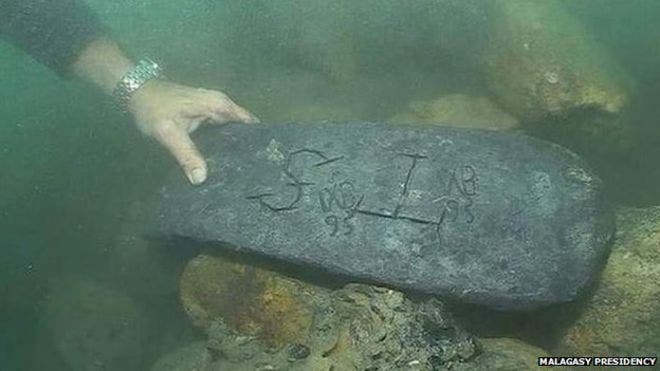 US explorer Barry Clifford discovered the shipwreck and recovered the silver bar, but he believes that many more still lie undiscovered at the bottom of the sea.

“Captain’s Kidd’s treasure is the stuff of legends. People have been looking for it for 300 years. To literally have it hit me on the head – I thought what the heck just happened to me. I really didn’t expect this,” Mr Clifford said. “There’s more down there. I know the whole bottom of the cavity where I found the silver bar is filled with metal. It’s too murky down there to see what metal, but my metal detector tells me there is metal on all sides.”

The bar, which is marked with what appears to be an “S” and an upside down “T” is still not confirmed to be directly connected to Captain Kidd.

A vicious pirate, or a betrayed victim?

Kidd is a controversial figure. He was either one of the most notorious pirates that ever lived, or one of its most unjustly vilified and prosecuted privateers. In an age where the British Empire was obsessed with overjustification, there is no direct evidence to account for his alleged acts. He was appointed by the Crown to tackle piracy and capture enemy French ships, but seems to have turned to piracy himself. The story goes that he and other members of the crew mutinied, ousted the captain off the ship, and sailed to the British colony of Nevis. There they renamed the ship Blessed William, Kidd became captain and they started fighting other pirates, as well as the French, with whom Britain was at war at the time.

But in time, acts of savagery on Kidd’s behalf emerged, including plundering and torture. But everything blew up when he took over an Armenian ship the 400-ton Quedagh Merchant, which was loaded with satins, muslins, gold, silver, an incredible variety of East Indian merchandise, as well as extremely valuable silks. Even though the sheep bought its merchandise from the French East India Company, the ship’s captain was British, so Kidd relented and wanted to return the loot, but his crew wanted to keep the treasure, so he again relented, and his reputation as a pirate was confirmed. From there, several diverging storylines exist, but it seems clear that in the end, his crew started leaving him.

He knew he was a wanted man so he tried hiding his treasure, but again he was betrayed, by a man named Richard Coote, Earl of Bellomont – known for accepting bribes and turning a blind eye on pirates. Bellomont imprisoned Kidd and his wife in extremely harsh conditions, before sending him to England to be trialed. When questioned, Kidd refused to give any names, naively believing his Whig patrons would reward his loyalty. He was shocked to learn he was trialed with murder and argued against it, but he was found guilty. Not only did the Whigs not help him, but they helped convict him – hiding away evidence that might have saved him. There is good reason to believe that Kidd had a good chance of getting away, had he not been betrayed by everybody.

The belief that Kidd had left buried treasure contributed considerably to the growth of his legend. But was he actually a ruthless pirate, or was he simply a victim? We may never know that, but there are at least two sides to his story, and many believe him to be, if not entirely honest, then clearly not the vicious man history would have him.

Indeed, the claim that the silver bar is a part of Kidd’s treasure should be taken with a grain of salt, at least for now. A simple yet thorough search will almost certainly reveal if at least there is any treasure to talk about, because indeed, finding a single bar in a wreckage seems unlikely.

The mirage of a treasure still looms today, but in the meantime, Madagascar officials are enthusiastic, and hope that the new finding will spark interest in the country’s history and touristic attractions.