In Amsterdam, students and professors have occupied one of the University’s buildings. Here’s why it’s awesome

When the University of Amsterdam decided to close down several language studies, students reacted; but they didn't protest or used violence, they simply occupied one of the University's buildings, demanding a more democratic approach to education and more student participation.

by Mihai Andrei
in Other, Science
A A

When the University of Amsterdam decided to close down several language studies, students reacted; but they didn’t protest or used violence, they simply occupied one of the University’s buildings, demanding a more democratic approach to education and more student participation.

The University of Amsterdam may easily be considered one of Europe’s more liberal Universities, but that doesn’t mean things are peachy. It’s been more than two weeks since students occupied the administration building at the University of Amsterdam (UvA) on February 25 in a demonstration to preserve the smallest language courses at the university – Arabic, Polish and Scandinavian languages. Things have significantly grown since, and now, this has turned into the second largest student demonstration in Netherland’s history.

Last week, UvA staff joined the rebellion, declaring their solidarity with the students and threatening further actions if their demands are not met. There are several underlying reasons for this “rebellion” (such as huge accommodation prices at the student dorms and the lack of democracy in the university administration), but the main driver is frustration against the university’s business model – namely, that the university is run as a business, and not as a educational facility.

“We want real influence, but the management doesn’t listen to us. They continue as they like without giving us the opportunity to influence them,” says Charles Battaglini, a student of political science at UvA.

Initially, the students occupied the building Bungehuis, where the humanities are located, but after they were evacuated from there by force, the movement grew, and thousands of students peacefully marched down on the university, taking control of the main administration building as well.

“If they use violence and force to remove students, there will only be more students. We wanted to show that their strategy does not work,” says Battaglini. “The management met us there, but they did not listen. They just said that we should go. They didn’t even discuss with us. So we decided to stay, to occupy the administration building, recounts Battaglini.”

The peaceful occupation has now been lasting for two weeks, but the university management has stated they will not remove the students by force.

Rebelling against an educational crisis

There are several reasons why these events can be huge not just for Amsterdam or the Netherlands, but for the entire Europe. While initially only addressing a university matter, national problems were immediately addressed. Much of the frustration originates in a reform from 1997, when the government reorganized university managements. Now the boards consist only of external people, with zero representation from students or academic staff. This is a clear indication of the university being run as a business, with a complete lack of democracy and student/academa participation.

“Dutch universities have gone from being among the most democratic in Europe, to be those who have gone furthest in introducing a business-like structure,” says Peter Maassen, a Dutch professor at the Institute of Education at the University of Oslo. He says that back in the 1960s, Dutch universities were inspired by local democracies, and the main actors of the educational process (students and professors) had a real saying in how things were run. “Students want a true democratic university. They want the students and academic staff to decide, and have the administration marginalized,” says Maassen. 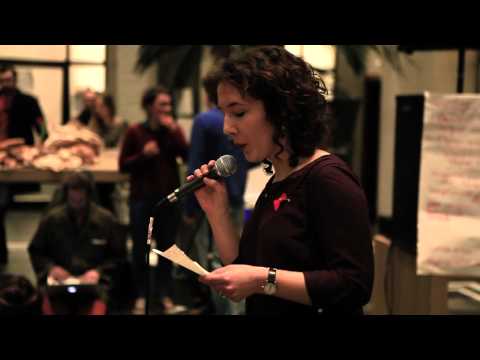 When the language studies were closed, it was done for economic purposes – and that was the last straw. It’s easy to understand why students feel like they are treated like simple customers or statistics. The managers, rather than focusing on improving the educational process and focusing on the research and creating better future generations of conscious, educated and efficient citizens, are focused on cutting costs and making money. They put immense pressures and unrealistic expectations onto increasingly precarious staff, limit grant and scholarship access while getting higher salaries themselves. It’s becoming increasingly difficult for researchers to access research money, while for students, the lack of cheap accommodation and increasing costs lead to student loans and difficult economic situations.

The struggle at UvA has mostly been local and national in character, but the implications and challenges raised by the group of students and staff go at a much higher level. Education throughout the developed world seems to be in crisis – structurally underfunded and understaffed in most of Europe, prohibitively expensive in the US. The fact that even at the University of Amsterdam, one of Europe’s better universities, where much of tuition fees are covered by the government and where grant money does exist, seems to be dealing with this kind of problems speaks a lot about the issues threatening European education.

“Interestingly, it has been precisely the countries where this neoliberalization of higher education has proceeded furthest that have experienced the most spectacular student protests in recent years: from the Penguin Revolution in Chile to the Red Square movement in Québec, and from the campus occupationsin California and the recent student debt strike at Everest College to the student riots in the UK. The Netherlands, still 10 years behind the curve, has long been eager to catch up with its neoliberal counterparts. Witnessing the recent student revolts in these countries, it should probably have known better not to push this logic too far. As Polanyi famously argued, there is a limit to how far you can go in commodifying the commons. At some point, the commoners will rebel.”

What makes this thing more interesting is that they’re not occupying the University and protesting – they’re occupying the University and having classes, presentations and workshops; they call this The New University. Ewald Engelen, a Dutch financial geographer and professor at UvA is one of the people who gave lectures in the occupied building. He was extremely critical of the current economy  practitioners, which he sees as “disguised mathematicians who are settled on publications in disguised mathematics journals”. 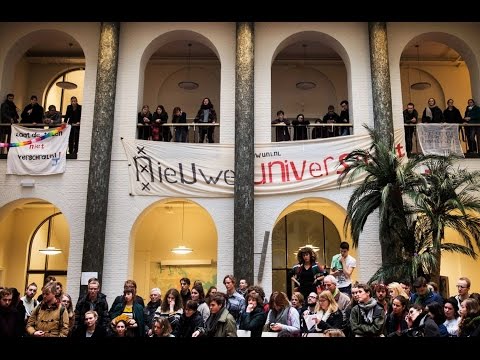 A group of University of Amsterdam lecturers, calling themselves Rethink UvA, joined the protest and gave the Executive Board their demands and an ultimatum that more actions will follow if the demands are not met. Here are the general demands:

While we embark on a thorough discussion of how best to meet this goal, we demand:

An immediate moratorium on restructuring processes, negotiations and sale of UvA property, and institutional mergers;
That the CvB immediately agrees to initiate a detailed proposal on how it intends to facilitate a democratization of the UvA and restore the relations of trust it has undermined, or else resign from their posts;
To initiate a full investigation by an independent committee of the university’s financial policies and current state of affairs.
These are preconditions for, not a consequence of, a university-wide discussion, which must result in the implementation of the following processes:

Shifting the weight of a quantitative, output-based financial model to qualitative forms of evaluation, including peer and student review;
Fostering a genuine academic environment where research and teaching are combined, and countering the present tendency to split these activities into a two-tier system that rewards the former at the expense of the latter;
Defining equitable workloads in teaching, research, and administration, and creating visible and accessible paths to career development for temporary and permanent staff alike.
We call on the CvB to accept our demands for immediate actions (nos. 1-3) and agree unequivocally on the longer-term goals of the university (nos. 4-6) within two days, that is, until Friday 6 March, 2015, at 4pm. Otherwise, we will escalate our struggle, including but not limited to walk-outs, teach-ins, symbolic actions, petitions, occupation of UvA buildings and facilities, performances, gatherings, and strikes.

This hasn’t happened until today (16 March), and while most people were expecting the enthusiasm to dwindle down and protesters to leave, the movement actually grew. So far, the management has not agreed to any of the demands, but at this point, it seems that at least ideologically, they have suffered a defeat. While the actual people in the university, the students, the professors and the staff may have not won any administrative power, they stuck together and they made their point – in a way, they won the administrative heart. According to reports, a large banner calling for direct democracy now hangs in front of the rector’s office, while the high-level managers are nowhere to be seen. The next few days or weeks might be crucial for the students not only in the Netherlands, but in the entire Europe, and even if nothing changes… something has already changed. Engelen has referred to Maagdenhuis as “the most interesting place in Western Europe right now”. I think he might just be right.