by Tibi Puiu
in Animals, Great Pics
Reading Time: 1 min read
A A

Smaller, yet heavier then their legendary brethren, the giant squid, the colossal squid is an elusive animal that lives deep in the Antarctic waters. Scientists have known of their existence since the 1920s, judging from scraps  found inside whales and sucker imprints on whale skin. It wasn’t until 2007 that the first complete specimen was found, and the same ship that made the discovery pulled out another one only recently, as previously reported on ZME Science.

The newly found specimen is a 770 lbs (350 kg) female that measures nearly 11.5 feet ( 3.5 m) in length. The fishermen were of course looking for something else, but when you’re pulling things out of the murky waters at depths of 1800m, you better be prepared for some crazy stuff. The crew donated the colossal squid to the Museaum of New Zealand Te Papa Tongarewa, where it remained on ice until it was ready for dissection. The operation was broadcasted live via webcast. 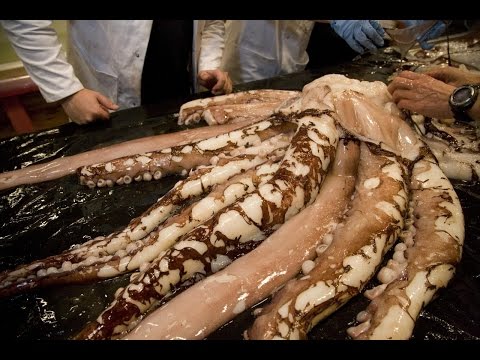