by Tibi Puiu
in Other, World Problems
Reading Time: 5 mins read
A A
Share on FacebookShare on TwitterSubmit to Reddit 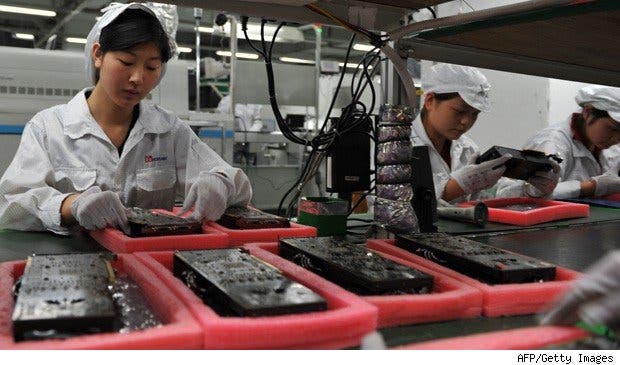 Foxconn Taiwan is the world’s largest manufacturer of electronic components, most famous for being responsible for Apple’s iPad and iPhone assembly. Most of its plants and the gross of its 1.2 million workers are located in China. Recently, however, the company’s name has been long time criticized by international media outlets who in fine lines labeled Foxconn as a slave driver.

In the last year alone Foxconn was forced to cease operations on multiple occasions due to worker strikes, and a wave of suicides has earned the company a bad name. Despite this, thousands flock to Foxconn factories’ front yard  each day looking for work. Most of them are inland immigrants who left their villages in search for work to support their families back home. TIME’s Techland tells a bit about the life of an average worker at Foxconn.

Still, life at the Shenzhen plant can be tough. An undercover report from Southern Weekend reporter Liu Zhiyi described a world of monotonous work under bright lights, 10-hour work days before overtime (which, thanks to voluntary overtime affidavits, can exceed 36 hours per month) and strict, unceasing supervision. It can also be lonely; earlier, TIME reported on the high employee turnover that makes social connections for migrant workers, already separated from their families, extremely difficult, even in cramped quarters.

Apparently, Foxconn has had enough of the constant hassle that comes with employing human workers. Last year the company’s Chairman Terry Gou stated that they intend on deploying 1 million robots within three years for their plants in China. A highly ambitious goal which apparently will fail to hit its mark exactly, since only 10,000 of the 300,000 envisioned robots were installed this year.

Foxconn’s take on this?

“The use of automation is driven by Foxconn’s desire to move workers from more routine tasks to more value-added positions in manufacturing such as R&D, innovation and other areas that are equally important to the success of our operations.”

Alright, so Foxconn is going to move its hundreds of thousands of assembly line workers to labs and help desks right? I have feeling that’s no rightfully so.

China as an economy flourished in the past two decades as globalization and free market capitalism brought an influx of cash in the country from foreign investors looking to outsource their manufacturing operations. Although China is a very rich country in natural resources, its most valuable commodity, in the eyes of western corporations, is its cheap labor. Ironically, in many places across China, people are starting to experience the outsource wave that hit America in the early 1990s for instance. Millions of jobs in manufacturing were outsourced then to cheap labor nodes like China, Indonesia or India. Since then, the scales have started to even on the other side as well. 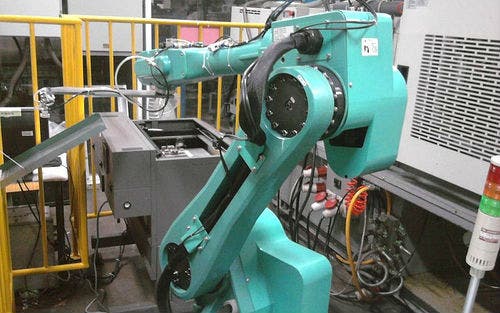 The average salary for a Chinese manufacturing plant worker has risen tenfold, along with lifestyle. Foxconn, under intense pressure from scrutiny, has more than quadrupled the salaries of its workers in the past 5 years, which stands at around $400 at the moment.  The robots that it has recently installed reportedly cost between $20,000 to $25,000 – roughly as much as a plant worker earns in six years, but considering the current wage increase trend, this would become highly profitable for Foxconn in the long-run.

China has lost a lot of jobs recently as manufacturing companies moved their operations to countries with lower labor costs, most notably Vietnam and Bangladesh. Foxconn itself has moved much of its manufacturing to Malaysia and China’s interior, where the region is still developing and a lot of cheap labor can be found.

“Workers’ wages are increasing so quickly that some companies can’t take it longer,” said Dan Bin, a fund manager at Shenzhen-based Eastern Bay Investment Management, which invests in technology and consumer-related shares in China and Hong Kong.

“Automation is a general trend in many sectors in China, such as electronics. Of course some companies will consider moving their manufacturing overseas, but it’s easier said than done when the supply chain is here.”

Not much is known about the Foxconn robots, which have been developed in-house under the name of FoxBot and which according to officials are designed for some simple and repetitious tasks. There are different versions. Some appear crab-like, others act as lifts, some as pick and place robots. All appear to be capable of precise movements. According to Foxconn officials, the first batch of robots have been deployed in the Jincheng, Shanxi Province, China, where 200,000 workers are currently employed in the company’s plants.

The International Federation of Robotics reports that the number of operational robots in China increased by 42 percent from 2010 to 2011 (close to 75,000 robots), an unprecedented growth in the 50-year history of robots. This would mean that by 2019, China could see as many as 1 million robots deployed. Obviously Foxconn is definitely off track with their automation prediction, but not by a long shot.

One thing seems pretty clear, the future of manufacturing is with robots, not people. Any work place that primarily entails a sequence of repetitive actions can be easily replaced with a robot that is a lot more efficient and profitable – it doesn’t complain either. Of course, this also means that China will lose its leverage in the coming decades when robots will become cheap and reliable enough to be widely implemented even in small plants.