Squished-booms: looking at the behavior of underwater explosions

Explosions behave quite differently underwater than what you'd see on the surface.

by Alexandru Micu
in Feature Post, Physics, Science
A A

Some things go boom, others don’t. The first category is definitely more fun.

A material explodes when it increases in volume rapidly and releases a lot of energy. The most usual energy storage used to create explosives is of the chemical kind, but explosives can be created using atomic, electrical, or mechanical sources. The characteristic boom or bang of an explosion is how your ears pick up on the “changing volume” part of the explosion, the shockwave. This is the force that lends explosions their destructive nature. The biggest part of an explosive’s energy is expended as light, heat, and work.

Not all explosions are made the same. The medium in which detonation takes place has a huge influence on the way the explosion and its shockwaves behave. And, while surface explosions are pretty ubiquitous in movies, underwater explosions aren’t — which is a shame, because they’re really pretty.

So let’s watch some

First thing first: explosions are inherently hard to enjoy properly — they’re ephemeral, gone in a flash of the eye.

That is, unless you film it thousands of times faster than the eye can see, which is exactly what the Slow Mo Guys did. They took a firecracker, set it alight, then submerged it in a fish tank to blow up — all under the watchful lens of a 120.000 fps high-speed camera. The resulting reel slows the detonations down enough for us to observe some basic principles of underwater explosions. I’ve taken the explosions and turned them into gifs below, but the whole video is pretty good and you should watch it. 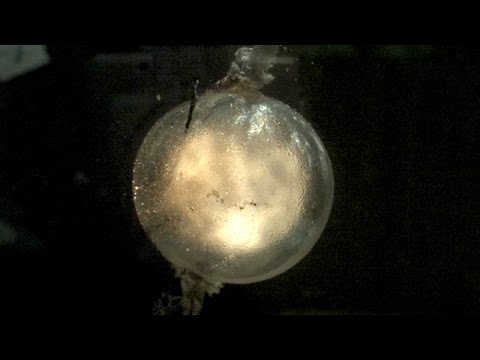 Here are the firecrackers exploding.

Underwater detonations spread out in the begging, creating a hollow sphere inside the liquid. This soon collapses in on itself, as water rushes to fill the gap.

This happens for two reasons. One, water is much denser than air, so it’s a lot harder to push around. Then there’s the fact that water, unlike air, can’t be compressed. This is the same property that underpins hydraulic systems (incompressibility) and because of it, the firecracker has to act on the fluid as a whole. In essence, this means that it has to perform work on a much denser, much larger medium. This property is also used by SWAT teams and military personnel to breach doors in the form of water impulse charges — water here is used to direct the force of the blast evenly onto a surface.

A firecracker set off in normal conditions can propel gas and fragments a few meters away, but underwater the explosion has enough energy to expand only a few centimeters across.

In this gif, the detonation took place closer to the water’s surface and you can actually see the liquid pouring in on the collapsing bubble.

Apart from this shot, the video itself doesn’t add that much from the one above (the guy shooting it does have a necktie though). You can see it here.

The gases released during detonation are then squashed by the liquid’s weight. This compression-explosion interplay can become quite lively, as the water compresses the gas as far as it can, then gets pushed back, and repeat. The collapse of the hollow bubble generates the first shock wave. Secondary shock waves are created as gas and water wrestle.

TheBackyardScientist can help explain with his liquid nitrogen bomb. He only shot with a 240 fps camera, so you can’t actually see the liquid being pushed during the explosion — but you can see the awesome gas-water play after it. 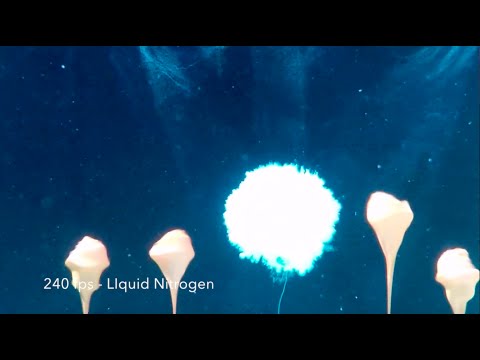 Here are some highlights.

TBS conveniently placed some balloons around the point of detonation, to pick up on the shockwaves’ motions. As you can see, there’s a lot of motion going on throughout the fluid as the gas gets compressed then expands.

So this one will feature a nuke ’cause its the last part — why not go big?

As you can see, the highest point the water is thrown upwards lies directly above the point of detonation — the center point of the shockwave. If you pause the video or look at the thumbnail image you’ll see that the shape of the column of water being pushed upwards follows an exponential curve — not the round shape we saw in the bubbles.