“No small matter: Science on the nanoscale” review 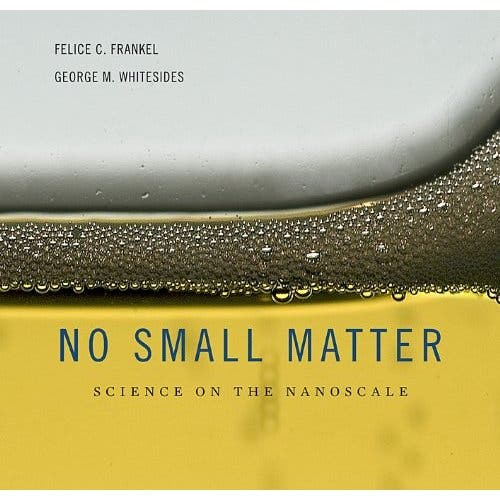 Nanotechnology is perhaps the field with the most spectacular development over the past years, but it can be really hard to understand what’s going on at that scale, mostly because we can’t see it (doh!), but also because the laws that apply there are slightly different.

No small matter:  Science on the nanoscale is the work of George M. Whitesides, the man with the highest H index of all living chemists and Felice C. Frankel, winner of the Photographic Society of America’s 2009 Progress Medal, and it has to be said, it’s awesome. Before I get into talking more about the book, I want to say that this is not a paid review, and everything I write is my honest opinion.

The book is written mostly for those who are just getting into nanotechnology or have a basic grasp of what’s going on there, but everybody has something to take from it, regardless of their interests and current knowledge; it probably fits best with undergrads, though. But, if you wanted to know what happens at a molecular level when you play the violin, take a pregnancy test or lit a candle (and way more), this is what you need to read.

A small revolution is remaking the world. The only problem is, we can’t see it. This is the book’s catchphrase, but it’s a bit too simple if you ask me. The virtual voyage the authors have prepared for the readers is just breathtaking, filled with detailed pictures of seemingly invisible objects, such as nanotubes, viruses, etc., proving what photography and high power microscopes can do when working together.

Basically it provides an overview of where nanotechnology is now, looking at what it has been and what it will probably be, as well as the advantages and dangers that this microscopic (or submicroscopic) world brings. In layman’s terms, you can call it an introduction in the science of the little; and what an introduction it is! What really convinced me of the value of the book is that aside from it’s educational part (which is explained logically, in detail, but kept simple) was it’s interesting part. I often found myself reading one page after another and forgetting to look at the pictures, even though they were really great. This happened because the information is presented in a clear, explosive and informal manner, allowing readers to grasp the basic core of nanotechnology.

“The textbook is well-written and concise, allowing readers with little or no prior knowledge about nanotechnology and nanoscience to understand and appreciate the concepts easily.”
Tan Lay Theng
Republic Polytechnic, Singapore

Get it via Amazon